Ahoj is the brand name of an effervescent powder and other effervescent products manufactured in Germany since 1925 , symbolized by a blue-clad sailor . The name is derived from the sailor's cry ahoi . The powder is sold in sachets. The brand is owned by the German confectionery company Katjes after the original manufacturer Frigeo was bought out . Ahoj and the blue sailor are among the oldest and best-known German brands . 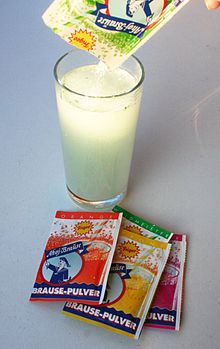 In 1925 Theodor Beltle from Stuttgart-Bad Cannstatt and his brother-in-law Robert Friedel founded Robert Friedel GmbH (Frigeo) , which produced Friedel-Brause as "fizzy lemonade powder for all walks of life". Initially, the effervescent was marketed in triangular sachets containing two separate tablets with soda and tartaric acid that had to be put into water together. Initially orange and lemon were offered as flavors .

Beltle experimented further with baking soda and tartaric acid and created a fizzy lemonade powder from them. Its recipe has remained the same over the years. In 1930 the powder came on the market in four flavors: woodruff , raspberry , orange and lemon.

In 2002 Katjes took over the Frigeo company. The range was expanded, so gummy candies and lollys were offered under the brand name. According to the company, 200 million packs of the substance for beverages are now produced at the Remshalden site (as of 2009).

Ahoj-Brause is marketed as a powdered drink. The preparation instructions on the back of the packaging read the following: “To make a wonderfully fresh fizzy drink with the flavor [...] with a type of sugar and sweeteners. Let the Ahoj effervescent powder stir up in 0.2 liters of cool water (mineral water) and enjoy immediately to the full. ”However, the powder is sometimes consumed simply neat.

A well-known shot is the "Vodka Ahoj": The effervescent powder is sprinkled in the mouth and a glass of vodka is poured afterwards. Shaking the head vigorously mixes powder and vodka in the oral cavity before swallowing.