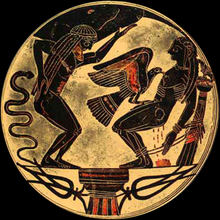 Prometheus bound with the eagle; left his brother Atlas (drinking bowl from Cerveteri , around 560/550 BC, Vatican Museums , Rome)

Aithon ( ancient Greek Αἴϑων Aíthōn “the shining one”, “the sparkling one” or “the burning one”, Latinized Aethon and, according to ancient times, also Ethon ) is the name of an eagle in Greek mythology that has only been handed down in Latin . In mythology, the eagle was considered a divine and heavenly bird. It was sacred to Zeus , the father of the gods, and is his attribute in art . According to legend, Zeus denied mortals possession of the fire. Then the Titan Prometheus stole fire from the gods and brought it to humans. That is why he was tied up on the orders of the father of gods and forged in the wasteland of the Caucasus Mountains . There the eagle visited him regularly and ate his liver, which was then constantly renewed. Only after a long time did the hero Heracles relieve the titans from this torment by killing the eagle with an arrow. In the fine arts of ancient and modern times, the torture of Prometheus by the eagle has been depicted frequently.

The only source that survives the name of the eagle is the mythographic handbook Genealogiae by the scholar Gaius Iulius Hyginus , also known under the title Fabulae . In his astronomical-mythographic handbook De astronomia , Hyginus reports a version of the legend according to which the eagle's parents were the monsters Typhon and Echidna . According to another version of the myth communicated by Hyginus, the god Hephaestus ( Vulcanus among the Romans ) created the eagle's body and Jupiter (Zeus) animated it.