The area of ​​the former Alsum belongs to the Marxloh district of the city of Duisburg and is the location of the Thyssen-Krupp AG steelworks . The area with the small village originally belonged to Hamborn , which was united with Duisburg in 1929. Originally, the mouth of the Emscher , which was laid several times, was also in Alsum. 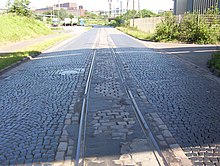 View from the exit of the Matena tunnel to the Thyssen plant in the former Alsum (2007). The meter-gauge tracks of the former tram line 21 (later line 10) can still be seen on the cobblestones .

During construction work in the port area in 1945, a cemetery with 18 burials was discovered and excavated under the direction of Rudolf Stampfuß ; it was used around AD 530–640. It was roughly in the middle between the farms of Alsum and Schwelgern, which is why the assignment to Alsum is not undisputed. How the ownership structure between the lords of Hochstaden, who sat as feudal lords on the Motte Husterknupp , and Otto I in the 9th century, has also not yet been conclusively clarified.

In 1139, Alsum ( Urlouchem ) was first mentioned in a document. A donation from Count Engelbert von der Mark is documented for 1348: he left the Schwelgernbruch to the Alsumers as pastureland.

From 1789 Alsum was administered by Beeck with Schwelgern . In 1856, Daniel Morian found hard coal for the first time in the neighboring Hamborn , and in 1865 it was also usable, which marked the beginning of the industrialization of what would later become Duisburg and thus the decline of the peasantry.

Thyssen's first steelworks in Bruckhausen went into operation as early as 1891 . At that time Alsum had a small Rhine port in the Emscher estuary; a Thyssenfabrik railway line led to this port. In the village with around 500 inhabitants there was a road bridge over the Emscher, which led south to Beeckerwerth. However, August Thyssen's request for an expansion of the Alsum port was not granted, so he avoided the building project in Schwelgern. In 1906 the Alsum port reached its peak with 1.75 million tons of handling, in 1913 it had already sunk below the million mark, in 1926 it was badly damaged by a devastating Rhine flood and then filled in.

In 1910 the Emscher was relocated from Alsum to the north, the old course was retained as the Old Emscher and used as a sewer.

In May 1930 Alsum received a new Catholic St. Nicholas Church. A census in 1939 names 3262 residents and 252 residential buildings. In 1944 and 1945 more than 60% of the houses were partially or completely damaged by bombing. In the few years from 1950 to 1953 alone, the terrain sank by more than a meter due to the mining taking place below, and further subsidence is forecast. In 1954, the city council decided to relocate the residents, but this was only partially carried out. In 1956, Alsum still had 1,293 inhabitants, roughly the same as fifty years earlier. A transportable wooden church with around 200 seats is consecrated as a Protestant church. In 1962 there were still 744 inhabitants, two years later 155. In 1965 the last inhabitant left Alsum. The area is filled in, the Alsumer Berg is created.

When the Thyssen works wanted to expand further, large parts of Alsum and Schwelgern were made available to them from 1965 onwards. As a result, Alsum no longer exists as a residential area, and Schwelgern has shrunk to a small stadium , a recreation area (Volkspark Schwelgern) and a few rows of houses. The name Schwelgern lives on mainly in the "Hafen Schwelgern" of the company ThyssenKrupp-Stahlwerk Schwelgern . In its place there was a farm called Schwelling in the 19th century, which has long since disappeared and can only be found on old maps.