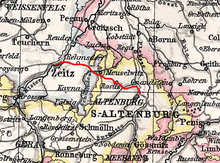 The route operated by the Altenburg-Zeitzer railway company

The Altenburg-Zeitzer Railway Company was a railway company based in Altenburg in what is now Thuringia . She was the owner of the Zeitz – Altenburg railway line .

The Altenburg-Zeitzer Railway Company was founded on March 17, 1870 in Altenburg, which was then the residence of the Duchy of Saxony-Altenburg . On June 19, 1872, the company opened a single-track, 25 km long railway line from Altenburg via Rositz - Meuselwitz - Wuitz - Mumsdorf to the Prussian town of Zeitz . In 1874/75 it had also received the concession to build the Altenburg – Langenleuba-Oberhain – Narsdorf line , but this project was not carried out until the turn of the century by the Royal Saxon State Railways .

The main purpose of the railway construction was to transport lignite from 18 pits in the Meuselwitz-Rositz area. The rest of the freight traffic and passenger transport were of minor importance. The Royal Saxon State Railways ran the business.

On January 1, 1896, the company was bought by the Saxon state. The track and vehicles became the property of the Kgl. Saxon State Railways over.

The operating resources, especially the locomotives, were owned by the company. At the time of nationalization, the Altenburg-Zeitz railway company owned a total of ten locomotives of four different types.