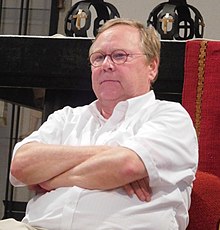 Andreas Bomba, 2018 in the Ev. St. Thomas Church in Frankfurt am Main

Andreas Bomba (* 1956 ) is a German journalist , writer , historian , music critic and singer and has been the director of the Bachwoche Ansbach since 2006 .

Bomba received piano and organ lessons as a child; later a vocal training was added. He sang in semi-professional choirs and vocal ensembles. From 1975 to 1981 he studied at the Johann Wolfgang Goethe University in Frankfurt am Main and later Romance studies and history in Italy and France . From 1979 on he worked as a journalist and wrote music reviews for several newspapers, especially for the Frankfurter Neue Presse , and was also a writer, critic and presenter for several radio stations such as Südwestrundfunk and, since 1984, for Hessischer Rundfunk . In 1992 he founded the series “Musikszene Hessen” in hr2-kultur , as well as other talk programs and programs with sacred music. In 1987 he received his doctorate on the subject of chansons de geste and French national consciousness in the Middle Ages .

He has authored several books and articles on musical and poetic analysis. His book on Johann Sebastian Bach , The Complete Works of Johann Sebastian Bach , was published in 2000. From 1996 to 2000 he planned and produced the Edition Bachakademie for the Internationale Bachakademie Stuttgart and the Hänssler Classic brand , the first complete recording of all of Bach's works on 172 CDs. He was appointed music director of the Bachwoche Ansbach in 2006 and headed the 60th anniversary of the festival in 2007.

Bomba is active in numerous juries and advisory boards, for example at " Jugend musiziert ", the Bad Homburg Organ Festival Fugato, the Binding Culture Prize , the Conducting Competition of the BHF Bank, the Competition of the International Organ Week Nuremberg , the "Standing Conference Central German Baroque Music" and on the Board of Trustees of the Windsbacher Boys' Choir .