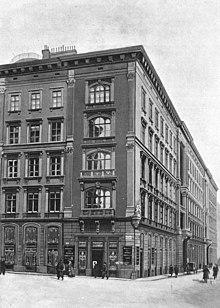 The Anglo-Österreichische Bank , Anglobank for short, was an Austrian banking institute with headquarters in Vienna (Strauchgasse 1, Innere Stadt ), founded in 1864 with partly British capital and taken over by Creditanstalt in 1926 .

Before 1914, the bank took a leading position in the financing of the Bohemian lignite mining (cf. Ignaz Petschek ) and acted as a sponsor when the magazine “ Der Österreichische Volkswirt ” was founded. In 1913 the company had 43 branches, only slightly fewer than the leading Viennese bank association in this regard and almost twice as many as the considerably larger Creditanstalt .

After the First World War , Anglobank was supposed to bring Western European capital into Austria, which had become small, but the project failed, and the institute merged with CA.