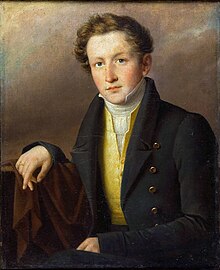 Prince Leon Sapieha (born September 18, 1802 in Warsaw ; † September 11, 1878 at Krasiczyn Castle ) was a prince from the Sapieha family and a politician.

Leon Sapieha was the son of the prince and Lithuanian country rougher Alexander Sapieha (born September 3, 1773, † September 9, 1812 in Dereczyn) and his wife Anna Countess Zamoyska. The father died on September 9, 1812 at the age of 39. His son Leo was only 10 years old at the time. He first received home schooling and then attended schools in Warsaw. From 1820 to 1824 he studied law and political science in Paris and Edinburgh. Then he entered the civil service of Congress Poland where he worked in the Ministry of Franciszek Ksawery Drucki-Lubecki . In the November uprising of 1830 he was on the side of the rebels. He became Józef Bem's adjutant and an artillery officer. After the defeat of the insurgents, he fled from Congress Poland to Galicia . There he lived first on his Piskorowice estate, then on his Krasiczyn estate.

In order to lift the bad economic situation in Galicia, he set up a Galician Landesbank, whose deposits should be guaranteed by the estates . In November 1841 the Landes-Credit-Institut was founded by the estates and Leon Sapieha was appointed the bank's first president.

He also established the Galician Agricultural Society and was elected President. This began in 1856 with the opening of agricultural schools (the first school was opened in Dublany ). He himself invested model estates on his estates. In 1856 the Krakow-Lviv Railway was also founded, and he became its president. He had a major influence on the establishment of the Galizische Sparkasse in Lemberg. He later became director of the Anglo-Austrian Bank in Lviv. He later became head of the bank's general council for some time.

Leon Sapieha had the Sapieha Palace built in Lviv in 1867 .

After the March Revolution he was the spokesman for a deputation from Galicia to the Kaiser in Vienna. In June 1848 he was a participant in the Slavs Congress in Prague. He became a member of the Reichstag in Kremsier.After the Galician Landtag was newly formed in 1861 , he was elected to the Landtag by the curia of landowners and appointed President ( Landmarschall ) there until May 1869. In addition, he was hereditary member of the Mansion .

Presidents (Land Marshal) of the Landtag of Galicia and Lodomeria