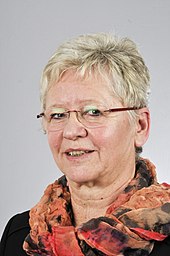 Anita Tack (born April 4, 1951 in Dresden ) is a German politician ( Die Linke ). From 2009 to 2014 she was Minister for Environment, Health and Consumer Protection of the State of Brandenburg . Between 1994 and 2019 she was a member of the Brandenburg State Parliament .

From 1969 Anita Tack studied urban development and regional planning at the University of Architecture and Construction in Weimar . She graduated in 1973 with a degree in engineering. She then worked in the Territorial Planning Office of the Potsdam District until 1987 . In 1987 she became deputy chairwoman of the district planning commission in Potsdam . From 1990 to 1991 she worked as an employee of the Potsdam district administration authority. From 1991 to 1994 she was the deputy head of the parliamentary group office of the PDS in the Brandenburg state parliament . Anita Tack has two children.

After the state elections in 2009 and the subsequent change of government, she was Minister for Environment, Health and Consumer Protection in the Platzeck III cabinet from November 2009 to 2014 .

For the 2014 state election she ran in the Potsdam I state constituency . In the 6th electoral term she was spokeswoman for her group for urban development, building, housing and transport. She worked as vice-chair of the Infrastructure and National Planning Committee and a member of the Budgetary Control Committee.