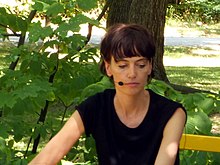 Anja Hilling (* 1975 in Lingen an der Ems ) is a German playwright who lives in Berlin .

Anja Hilling completed her studies in German and theater studies at the Free University of Berlin as well as "scenic writing" at the UdK Berlin . At the same time, she was a waiter in a bar in Berlin-Kreuzberg .

Her first play, Sterne , was invited to the Stückemarkt at the Berlin Theatertreffen in 2003, where it was awarded the Dresdner Bank Prize for New Drama. Your next piece, the tragic comedy my young idiot heart , was invited to the Mühlheimer Theatertage in 2005 in a production by the Münchner Kammerspiele . In the same year, Anja Hilling was selected as the youngest writer of the season in Theater heute's critics' survey .

Anja Hilling made her breakthrough abroad with the civilization drama Black Animal Sadness (2007). The piece was in Europe, u. a. the Théâtre national de la Colline in Paris and the Royal Dramatic Theater Stockholm (dramaten) . The youth drama Sinn (2007) was created in cooperation between the Thalia Theater Hamburg and the Comédie de Saint-Étienne .

In 2011 she wrote the garden , a five-act play about the tension between art and criticism. The play was premiered at the Schauspielhaus Wien , where her work Symphony of the Sunny Day was premiered in 2014.

Together with Simona Sabato she develops film projects. In 2014, Anja Hilling was nominated for the German Youth Theater Prize for the youth drama what goes inside . In 2015 she wrote the play Lenz Ewiger Durst , which sends the poet Jakob Michael Reinhold Lenz to our present day and which premiered at the Royal Theater Stockholm. The conflict with Camille Claudel and Paul Claudel resulted in the two love dramas Massiver Kuss and Mittagswende. The hour without a trace .

In 2017 the piece How can I find you, move in with me and persuade me to stay , was commissioned for the Mannheim National Theater .

The radio composition "Interlunium 1-21" was created as a Dionysian hymn together with the electro duo Mouse on Mars .