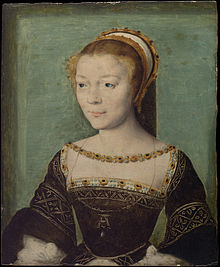 Anne de Pisseleu d'Heilly was the daughter of Guillaume de Pisseleu, a knight from Picardy . Before 1522 she came to the French court as one of the ladies-in-waiting of the queen mother Luise of Savoy . Probably after his return from captivity in Madrid in 1526, Francis I made her his mistress. She replaced Françoise de Foix in this position .

Anne was beautiful, witty, educated, and successful in gaining the king's favor. In 1536 she married through the mediation of King Jean IV. De Brosse and received the Duchy of Étampes . The duchess's influence on the king, especially in the final years of his reign, was considerable. She protected Admiral Philippe de Chabot against Anne de Montmorency , who was supported by her rival Diane de Poitiers , mistress of the heir to the throne. She was open to new influences and ideas and collaborated with the king's sister, Marguerite d'Angoulême . She used her influence to advance and enrich her family. Her uncle Antoine Sanguin de Meudon († 1559) was appointed bishop of Orléans in 1535 and cardinal in 1539. After the king's death, she was humiliated and expelled from court by Diane de Poitiers. She died, forgotten, in 1580 during the reign of Henry III .