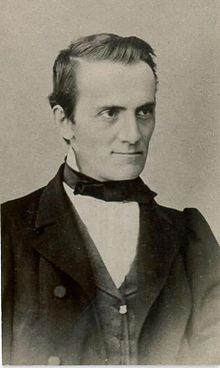 Anton Janežič (born December 19, 1828 in Lessach ; † September 18, 1869 in Klagenfurt ; alternative spelling : Janežić ) was a Slovene philologist from Carinthia, who made a contribution to the spread and stabilization of the Slovene written language.

Janežič came from a wealthy farming family. He attended high school in Klagenfurt , where he became a Slovenian teacher in 1848. One of his students was Josef Stefan . From 1851 to 1855 he studied a. a. with Franz von Miklosich Slovenian and German for teaching. Then he worked again in Carinthia. He contributed to the maintenance of the Slovene language by translating legal texts into Slovenian, writing textbooks and publishing magazines. In addition, he was one of the founders of the Hermagoras Brotherhood , a Catholic, Slovenian-speaking book club and publishing house, which aimed to educate and cultivate the language of the common people, especially the Carinthian Slovenes .

In Klagenfurt, in the suburb of Völkermarkt, the forecourt of the Slovenian grammar school is named after him.