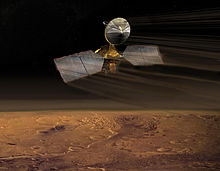 Mars Climate Orbiter : Planned aerobraking maneuver from September 23 to November 19, 1999 with details of the orbital times

The spacecraft to be braked is initially in an elliptical orbit. The periapsis (smallest distance) of the orbit lies in an area of ​​the high atmosphere of the celestial body. Then the height of the apoapsis (furthest distance) is reduced with each round trip . This reduction is due to the flow resistance of the atmosphere. If the spacecraft is not supposed to land, when the desired apoapsis is reached, the thrusters are ignited in order to lift the orbit of the periapsis out of the atmosphere. To improve the braking effect, the solar panels of a planetary probe can be used in a similar way to airbrake flaps or blades, with which the resistance in the upper layers of the atmosphere is increased or the heat input is distributed over a larger area. The duration of the atmospheric braking maneuver can be several months.

In contrast to the atmosphere capture ( aerocapture ), the atmosphere braking involves the injection from a hyperbolic orbit into a (highly elliptical) orbit by means of the engines. When catching the atmosphere, braking takes place at an escape speed with a single flight through the atmosphere, so that a heat shield is necessary due to the high braking power .

If, in addition to the use of engines for pivoting into an atmospheric braking path, additional braking by engines is required, it is most effective if this is done shortly before, during or shortly after the first atmospheric braking maneuver, because

On aerodynamic braking maneuvers in the EDL phase (Entry, Descent and Landing):

Since atmospheric braking is self-reinforcing and the density in the high atmosphere also fluctuates considerably due to solar activity, atmospheric braking is usually initiated conservatively and permanently readjusted through further small course or position corrections using rocket engines. Successful atmospheric braking ends with a landing or is canceled by acceleration at the far point of the flight path. The latter raises the near point so that the orbit no longer leads through the atmosphere.

Since the late 1990s, atmospheric braking has been increasingly used to correct the trajectory of interplanetary space probes .

Aerobraking is used to swing into a planet-near, less elliptical orbit around a planet in a two-stage process. For this purpose, when approaching the planet for the first time, the speed is reduced by rocket engines to just below the escape speed, and then further reduced by means of aerobraking.

The method was first tested in 1993 by the Magellan Venus probe and first used in 1997 by the Mars Global Surveyor mission. Since then, this method has been used on all US probes that have been orbited into Mars.

The Starship and Super Heavy rocket is supposed to use aerobraking to slow down the return from Mars flights in the earth's atmosphere.