Atmospheric capture ( Aerocapture ) describes a technique with which the speed of a spacecraft arriving on a hyperbolic trajectory at a celestial body with a relatively dense atmosphere can be reduced to such an extent that it enters orbit . As a result, the spacecraft orbits the celestial body after this maneuver in an elliptical orbit with the result that it can no longer leave its gravitational field without further propulsion. 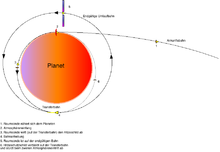 The different steps involved in capturing the atmosphere

In order to slow down the spacecraft, it comes so close to the celestial body that it flies grazing through the upper atmosphere . Because of the high frictional heat that occurs, a heat shield is required .

The degree of deceleration depends heavily on the flight altitude , which is therefore critical and requires precise knowledge of both the atmosphere and the flight path:

After Aerocapture the airspeed of the spacecraft fell below the escape velocity decreases the celestial body. It therefore enters an elliptical orbit around it, i.e. H. with an eccentricity of less than 1. The point closest to the planet (peri apsis ) is located deep within the atmosphere. For this reason, the spacecraft has to raise its orbit (i.e. accelerate again) with its engine during the first orbit in the apoapsis (point furthest from the planet) in order to raise the periapsis above the atmosphere, otherwise it will reenter the atmosphere and crash after a complete orbit would.

It is also possible to raise the orbit to a lesser extent with the aim of further decelerating during the further rounds by means of atmospheric braking ( aerobraking ). This is a low fuel consumption method of reducing the eccentricity of the elliptical orbit.

So far, this technology has only been used with two space probes . Zond 6 and Zond 7 each re-entered the atmosphere after an almost complete circling of the earth and an atmosphere capture over the Indian Ocean in order to prepare for landing.

The first probe to reach another planet by capturing the atmosphere was Mars Odyssey . Like many other NASA plans , however, this was not implemented, instead the probe used a rocket drive to slow down.