Atopy ( Greek  ατοπία , atopia , placelessness') describes in medicine a tendency with hypersensitivity reactions, namely with allergic reactions of the immediate type (type-I allergy ), on the contact with otherwise harmless substances from the environment to respond. So atopy refers to a physical standby to a pathologically increased formation of immunoglobulin E - antibodies (IgE).

The term atopy is incorrectly used synonymously for allergies of the immediate type.

Atopy is a hereditary hypersensitivity that is linked to the HLA system . In addition to the allergens , “atopens” are also described, which can activate the complement system and release histamine from mast cells via anaphylatoxins , whereby symptoms occur even on parts of the body that are not directly exposed (“placeless”, in contrast to contact eczema, for example ).

The mechanism of the disease is not yet fully understood. In simple terms, one can speak of an excessive immune response that destroys (in itself harmless) foreign antigens , but also damages one's own body. After previous sensitization , it is probably a matter of the rapid formation of specific antibodies of the IgE type, which bind to the mast cells and thus trigger their degranulation with the release of the tissue hormone histamine , among other things , as well as an increased complement sensitivity with the formation of anaphylatoxin .

Atopic diseases don't just develop because of genetics. The environmental factors play a big role. A large study with more than one million respondents in 99 countries showed that children who eat more fast food are also more likely to suffer from atopic diseases. However, it must be pointed out that the study cannot prove a causal relationship. 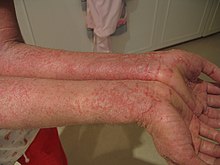 Depending on the clinical presentation, this readiness for an atopic reaction is referred to as

Up to 15% of the population suffer from atopic complaints in various degrees of severity.

Certain physical characteristics - stigmas - are more common in people who are predisposed to atopic reactions. These include: