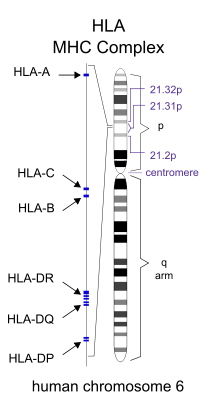 Location of some human leukocyte antigens on chromosome 6 with the gene locations HLA-A, -B, -C, -DR, -DQ and -DP.

The Human Leukocyte Antigen system , short HLA system (English human leukocyte antigen system ) is a group of human genes ( Human leukocyte antigens , HLA ; also HL antigens , histocompatibility antigens , and transplantation antigens called) required for the function of the immune system are centrally. The system comes under the name of major histocompatibility complex (MHC of English. Major Histocompatibility Complex ) in all vertebrates before. In humans, the MHC is known as the HLA system because the molecules can be detected with specific antibodies on the surface of leukocytes (white blood cells), but not on erythrocytes (red blood cells).

The genes for all HLA proteins with the exception of β-microglobulin ( chromosome 15 ) are found in an approximately 4 million base pair long section approximately in the middle of the short or p arm on chromosome 6 and can be topographically and functionally divided into two classes organize:

The class I region is at the end of the segment distant from the centromere . The six functional HLA class I gene locations as well as a number of pseudogenes and gene fragments are widely scattered, and the region also contains numerous other genes that have nothing to do with the immune system. Both point to a high evolutionary age of this region, as well as the broad functional spectrum of the HLA class I molecules (in addition to the antigen presentation also regulation of NK cells in the innate defense, regulation of the iron metabolism, etc.).

Between these two sections lies the so-called class III region, in which there are a number of other genes, but no HLA genes.

The HLA nomenclature had to be reformed in 2010 because the numerous newly discovered alleles in the old system, in which the allele was specified with a two-digit number up to 99, could no longer be consistently named.

The full name has since been made up of the following elements:

Where only the amino acid sequence of the encoded protein is important and not synonymous nucleotide exchanges, variants in non-coding sequences or special features of expression, the designation breaks down after the allele group (e.g. HLA-A * 02) or the allele (e.g. HLA-A * 02: 101).

The new nomenclature is only slowly gaining acceptance in practice. For example, the Central Bone Marrow Donor Register Germany presented the old nomenclature in June 2015.

The HL antigens are also important because of the HLA typing . It is based on the knowledge that many diseases are associated with certain HL antigens. This allows conclusions to be drawn about the risk of illness.

Furthermore, an HLA test of the donor and recipient is also carried out in special cases before a transfusion of platelet concentrates . Recipients who have had multiple platelets in their history can become sensitized, so that unsuitable platelets are quickly destroyed again. The transfusion of HLA-adapted platelets can then be necessary in order to generate an increase in the platelet count at all.

Everyone has 2 HLA traits ( alleles ) per gene location, one inherited from the mother and one from the father. The expression is codominant , ie both alleles are expressed. The HLA genes for the various gene locations are mostly inherited as a fixed set ( haplotype ). Only in about 2 percent of all people is there a recombination between the HLA segments of the two inherited chromosomes, i.e. a rearrangement of the alleles, during meiosis in the course of egg or sperm cell formation .

HLA typing is therefore well suited as a paternity test .

In the course of the approximately 10,000 generations of human history, however, the individually rare recombinations have resulted in several thousand different haplotypes. Since every person has two of these haplotypes, there are millions of different combinations of HLA class I and HLA class II molecules in the total population.