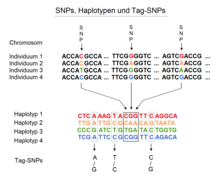 The haplotype (from ancient Greek ἁπλούς haplóos or haplús , simple ' and τύπος týpos , German ' image ' ,' pattern '), an abbreviation of “ haploid genotype ”, is a variant of a nucleotide sequence on one and the same chromosome in the genome of a living being. A certain haplotype can be individual, population or species-specific.

As in the International HapMap Project , the alleles compared can be individual combinations of SNPs that can be used as genetic markers . If some of the individuals have the same haplotype due to common ancestry at a certain gene locus , they are combined to form a haplogroup .

The term was introduced in 1967 by Ruggero Ceppellini . It was originally used to describe the genetic makeup of the MHC , a complex of genes that encode proteins important for the immune system .

Differentiation from the genotype

A distinction can be made between two cases (in the following the term " allele " refers to the different nucleotides A , C , G and T , but the number of repetitions of a certain microsatellite can also define an allele):

If an SNP is now determined in a polyploid population (of the same species), the haplotypes (of length 1) can be read off directly from the sequencing, as in point 1. Even with two SNPs it becomes problematic: During sequencing, the assignment of the individual alleles to their original chromosomes is lost. Different combinations of the alleles in SNP 1 and SNP 2 are now possible and thus also different haplotypes. The number of possible haplotypes grows exponentially with the number of SNPs.

Various methods have been developed to determine haplotypes in polyploid species.

A given chromosome of a given individual is sequenced several times and the corresponding haplotype is determined. During each sequencing, one of the homologous chromosomes was randomly selected from the polyploid set. The number of sequencing is chosen so that it can be assumed with a certain probability that no haplotype was left out during the sequencing. This is expensive and time consuming. In plant breeding, the problem is solved by creating inbred lines . In the final analysis, the homologous chromosomes of an individual from such a line are inherited and therefore identical (only homozygous SNPs in an individual). The determination of the haplotypes is reduced to point 1 and thus to a one-time sequencing of a chromosome or locus.

The means are not always available to carry out multiple sequencing or to create inbred lines. If heterozygous SNPs appear in an individual with one-time sequencing and if more than one SNP is considered, then different possible haplotypes can result for an individual. In order to select a biologically sensible one from these exponentially many possibilities (with a linearly increasing number of SNPs), various methods were developed based on different assumptions:
For methods ii.1 and ii.2, a population with more than one individual is necessary so that the basic assumptions apply and biologically meaningful statements can be made. Partial problems of the haplotype problem are NP-complete , since they can be represented by SAT ( Cook's theorem ) and in the worst case have the same complexity as SAT; the overall problem is thus NP-hard .

Nomenclature of the haplotypes

Rough genealogical tree of mitochondrial DNA in humans. The numbers indicate the position of the mutations.

Detailed family tree of human mitochondrial DNA
The numbers indicate the position of the mutations. “MtEve” is the mitochondrial Eve . “Outgroup” leads to mtDNA from other primates (e.g. chimpanzees). The figure uses the usual (incorrect) nomenclature with the "L1 haplogroup": However, L1 forms the root (L1a is no more closely related to L1f than to V!). Therefore the L1 fields have been crossed out.

A haplogroup can itself contain further sub-haplogroups, which in turn can be further subdivided. One tries to map a tree structure with the nomenclature of the haplogroups and uses letters and numbers alternately. Two mtDNAs of a haplogroup are always monophyletic . Characteristic mutations in the gene sequences of the mtDNA outside of the D-loop are used for the assignment.

A person can e.g. B. have the haplogroup C1a3b2. Your mtDNA is then closely related to that of another person, e.g. B. has C1a3b4. Of course, their mtDNA also shares a common ancestor with a third person who has C1a3c5, but that common ancestor had previously lived before the C1a3 lineage split. That is, C1a3b4 and C1a3b2 are monophyletic to C1a3c5. Likewise, C1a3b2 and C1a3c5 are monophyletic towards all H-haplotypes etc.

The nomenclature is implemented relatively inconsistently. Many letters have been used to denote the major non-African haplogroups. However, many old haplogroups occur in Africa. These are known collectively as “L” and are already used for subdividing the main groups into digits. There is still no scientific consensus on the assignment of some African haplotypes (in L1 and L3).

If you start from the root, the human mitochondrial family tree consists of a series of deep branches. These genetic lines are now called L1. Unlike earlier thought, L1 is not a monophyletic haplogroup, but forms the root. So L1 are actually a whole package of African haplogroups, which are as old as mitochondrial Eve and whose exact relationship to each other has not yet been clarified.

A mutation at position 3594 forms the branch on which the large haplogroups M and N as well as numerous other African haplogroups, which are still summarized today under L3, are located. Like L1, L3 is not a true (monophyletic) haplogroup. The haplogroups M and N occur in the vast majority of non-Africans. They are very rare in sub-Saharan Africa, where L1, L2, and L3 dominate.

The currently most extensive study of mitochondrial DNA was carried out by the Genographic Consortium (see also The Genographic Project ). In this comparison 78,590 genotypic samples were included and the mitochondrial haplogroups (and their subgroups) were represented in a phylogenetic tree .

The old haplotypes from the L branches dominate in sub-Saharan Africa. There is no doubt that they originated there. These haplotypes are also found in North Africa (approx. 50% frequency) and, to a lesser extent, in Europe and Western Asia.

Haplogroups M and N dominate in the rest of the world and are rare in sub-Saharan Africa. Special variants of the haplogroup M (M1) occur with a frequency of about 20% in Ethiopia. Either M has already arisen there or it is a Semitic return migration to the south.

Native Americans have haplogroups A, B, C, D, and X; of these, A, B, and X emerged from an eastern branch of the haplogroup N, C and D, on the other hand from haplogroup M.

Haplogroup X is noteworthy because it occurs throughout Eurasia and North America, albeit with a relatively low frequency. It used to be assumed that haplogroup X originated in Europe and only occurs in Europe. When the haplogroup was discovered among Native Americans, the hypothesis arose that it came to America from Europe by sea through European emigrants thousands of years ago. In the meantime, however, haplogroup X has also been discovered in Asia (Derneko et al. , 2001).