Glider, developed on the basis of the Lilienthal patent in 1894 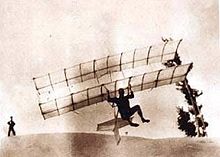 During his time at the Stevens Institute of Technology in 1885/1886, Herring initially tried his own design of a glider, which however did not prove to be functional.

Herring built its own glider planes from 1893 . The first model flew, but crashed due to lack of controllability. He then built several gliders based on the drawing in the Otto Lilienthal patent. This further development was also controlled by shifting the pilot's weight. From this improved design he made three pieces.

From 1895 Herring first worked for Octave Chanute , then for Samuel Pierpont Langley . He carried out aerodynamic experiments there. Langley visited Lilienthal in Berlin in the summer of 1895 and informed Herring by letter on August 6, 1895 about Lilienthal's flights with a double-decker glider. In January 1896 he moved to Chicago and worked for Chanute to experiment with gliders. The wings and tail were constantly varied. One of these variants proved successful.

On June 22, 1896, Chanute, his son Charley, Herring and William Avery took the train to the Indiana Sand Dunes on Lake Michigan and tested their gliders there. On August 21, the group drove to Lake Michigan for the second time. At the beginning of September the double-decker glider had already reached a flight range of over 130 m.

In 1898 he built a test aircraft with an approximately 3 hp compressed air motor . Herring himself reported two successful flights with this modified glider over 15 to 25 m, which were carried out in October 1898. However, the flights were not guided and the machine only had an operating time of 30 seconds.

In 1899 Herring developed one of the first American motorcycles with a combustion engine; a series production of the Herring never took place.

In 1902, Herring Chanutes replicated Katydid gliders and flew them in front of the Wright brothers in Kitty Hawk. Based on this contact, Herring proposed to the Wrights in a letter on December 28, 1903, to found a company for the manufacture and manufacture of aircraft. The Wrights did not reply to this letter, they were not interested in it. However, Wilbur Wright wrote to Chanute that the design used by the Wrights was very similar to that of Chanute and Herring from 1896/7.

After moving back to New York, Augustus Herring and Glenn Curtiss founded the Herring-Curtiss Company in 1909 , which produced the extremely successful Golden Flyer . This was the first company to be founded as an aircraft manufacturer. However, the company was liquidated because the patents Herring allegedly owned did not exist. Herring then founded the Herring-Burgess-Company in Massachusetts, which also manufactured some aircraft. During the First World War , Herring did some engineering services for the US Army.

He essentially spent the rest of his life filing lawsuits against many pioneers, including Glenn Curtiss, which dragged on through 1932.