The tamarillo or tree tomato ( Solanum betaceum , syn .: Cyphomandra betacea ) is a species from the nightshade genus . The tamarillo is best known for the small, egg-shaped red or yellow fruit for which it is cultivated .

Tamarillo are small, two to seven meters high, evergreen trees , the trunks of which are densely haired with unbranched, glandular, and glandular trichomes . The trunk branches sympodially after mostly four, more rarely after three leaf approaches. The paper-like leaves are on 3 to 25 cm long petioles, the length of the leaves can correspond to the width or up to 1.5 times, the size is in the range from 7 to 40 × 6 to 35 cm. The shape of the leaves is egg-shaped, heart-shaped to eyelet at the base, so that 1.5 to 6 cm long lobes are formed. The tip of the leaf is pointed, the edge is entire. The hairiness of the leaves is sparse on the axially facing (adaxal) side than on the axially remote (abaxial) side, only on the leaf veins and on the petiole is the hair more dense. The roots do not penetrate very far into the ground (shallow roots ). 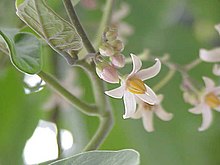 Inflorescence of a tamarillo

The branched or unbranched, loose and pendulous inflorescences are 2.5 to 15 cm long and consist of ten to 50 hermaphrodite flowers, they are slightly to very hairy. The inflorescence stalk has a length of 1.5 to 9 cm, the spindle is 2 to 8 cm long and the slightly hairy flower stalks have a length of 10 to 20 mm during flowering, become between 15 and 50 mm long and stand approximately when the fruit is ripe 3 to 10 mm apart. Just above the base, the flower stalks are clearly divided (joint), so that the short piece is only 1 to 3 mm long.

The five-fold, fragrant flowers initially develop as ellipsoidal to egg-shaped buds with blunt to pointed tips. In the flower the more or less hairy, glandular, cup-shaped and small, green calyx has a radius of 3 to 5 mm, the triangular calyx lobes are 1 to 2 × 2 to 3 mm in size, fleshy, blunt to cut off, pointed at the tip . The corolla is pink-whitish, plump to fleshy, has a diameter of 2 to 2.5 cm. The short corolla tube is about 2 to 3 mm long, the corolla lobes that adjoin the corolla tube are ovate, hairless and tomentose at the edge, 2.5 to 4 mm wide and 7 to 12 mm long at the base. The five short stamens have long anthers and short stamens.

The bars of the pale yellow and closely standing, upright anthers are each about 5 to 6 × 2 to 2.5 mm long and lanceolate. They open through pores that are adaxial (facing the axis) and distal (at the end of the anther). The sterile middle part of the anther, called connective, is thick and yellow-orange, 4.5 to 5 × 1 to 2 mm long and triangular. On the abaxial side (facing away from the axis) it is slightly shorter than the tips of the theka, at the base both are about the same length or the counters are slightly longer, on the adaxial (axially facing) side the connective is missing. The pollen grains are oval and three-lobed, have a granular surface and have a large number of fine spines. The upper continuous, two-chamber ovary is smooth, the stylus is also bare, round and 5 to 6 × 0.5 to 1 mm in size, and thus is about 1 to 2.5 mm on the stamens addition. The scar is head-shaped and there is a small disc .

The flower crowns usually open around noon, towards evening the petals again envelop the anthers and the style, which is then repeated for another two to three days until the flower closes for the last time. Fertilized flowers usually end this cycle a little earlier than unfertilized flowers. The anthers pop open at the latest at the same time as the flower crowns open, usually a little earlier. The pollen is not released immediately, but is released into a pollen cloud through a pore at the tip of the anther when it is touched or pressed. The fertilization probability of the style increases a few days before the flower opens and then decreases within five to eight days from the first day after the flower is opened for the first time.

Little is known about the pollination strategy and the original pollinators of the species. It is assumed that Solanum becateum is a plant with "pollen flowers", not like other closely related species with "perfume flowers", mainly from male ones Bees of the Euglossini tribe are visited for the fragrances emitted by the flower. There have been observations of pollinators from cultivated specimens from New Zealand, where the western honey bee ( Apis mellifera ), the dark bumblebee ( Bombus terrestris ) and the garden bumblebee ( Bombus hortorum ) visit the flowers.

The yellow to orange, red or purple, somewhat dull fruits are two-chambered, firm berries (armored berries ) with a size of 4 to 10 × 3 to 5 cm, are ellipsoidal or egg-shaped and have a rounded to pointed tip. The permanent chalice adheres to them and they often have darker stripes or spots, they are bare and interspersed with a few stone cells . In them there are many flattened, rounded, sometimes finely whitish hairy, light to red-brown and hard, sometimes barely winged seeds, with a size of about 3 to 4 mm. The seeds lie in a watery mucilage , the succulent pulp, the pulp, is relatively thin.

Tamarillo trees reach an age of three to four years, the first flowering occurs in the first branch of the shoot at a height of about 1 to 1.5 m at an age of eight to ten months.

For a long time no wild populations of the tamarillo were known, but since the late 1960s individual botanists have reported populations that are said to occur wild in southern Bolivia and the opposite regions of northwestern Argentina . Some botanical expeditions that took place between 1998 and 2000 were able to show that in all probability these populations were wild specimens of the species and not feral, originally cultivated plants. Morphologically there are no differences between the wild and cultivated specimens of the species, which indicates that cultivation was not long ago, probably around the time of Christopher Columbus ' arrival in America.

Tamarillo grow best in areas with temperatures between 18 and 22 ° C that have an annual rainfall of 600 to 800 mm. This roughly corresponds to the climatic conditions as they occur in the Andes at an altitude between 1800 and 2000 m. During short frosts, the younger branches and leaves of the plant die, but the frost does not last for a long time, the stronger branches and the main stem of the plant survive. Temperatures that are too high and prolonged periods of drought affect the set of flowers and fruits.

According to molecular biological studies, the species is classified within the genus nightshade ( Solanum ) in the so-called "Cyphomandra clade ". In addition to the species of the former genus Cyphomandra, it contains the Solanum sections Pachyphylla , Cyphomandropsis and Glaucophyllum . Characteristics that all species within the Cyphomandra clade have in common are the woody, shrubby or tree-like habit and often enlarged or clearly pronounced anthers connections or anthers undersides. So far, abnormally large chromosomes have also been found in all examined species . The relationship to other clades within the genus has not yet been clarified. 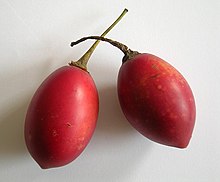 Tamarillo fruits on the tree

Although the origins of the species are in southern Bolivia and northwest Argentina, the main range today is in northwest South America. The plant was introduced in Central America, Mexico and the Caribbean. However, the main commercial cultivation area is New Zealand , where breeding and crossbreeding with closely related species such as Solanum maternum , Solanum roseum and Solanum unilobum are carried out. In 1993, around 200 hectares of land in New Zealand were used to cultivate tamarillos, from which around 2000 tons of fruit could be harvested. 87% of New Zealand exports went to the US .

The fruits are mainly eaten raw and cooked in Latin America, although the outer skin can have an unpleasant taste and be somewhat firm. The outer layer of the juicy pulp can be a bit bland and tasteless, but the inner pulp, which envelops the also edible seeds, is soft, juicy and sweet-tart.

In addition to its use as a fruit, where the tamarillo can be halved and eaten with a spoon in sugar, other uses are common: as a filling or side dish to meat, in spreads and various desserts, as jam or in chutneys . The fruit juice is now also used in Madeira (Portugal) to make traditional poncha .

The leaves of the plant are used in Ecuadorian folk medicine as a remedy for sore throats.

The fruits are mostly called “tomate de árbol” ( Spanish ), “tomate de árvore” ( Portuguese ) or “tree tomato” ( English ), which roughly corresponds to the German term “ tree tomato” . The term "tamarillo" was introduced with the cultivation in New Zealand, but has no further meaning itself.

The specific epithet " betaceum " is derived from the Latin betaceus , which was the name of the beetroot ( Beta vulgaris ) in late Latin and here refers to the color of the fruit. The former generic name " Cyphomandra " is derived from the Greek kyphoma (hump, hump) and aner (genitive andros ) and indicates the thickened connective of the male flower organs (anthers).

The species was first described in 1799 by Antonio José Cavanilles as Solanum betaceum . In 1845 Otto Sendtner transferred the species to its own genus called Cyphomandra , in which around 40 species were recently classified.

It was not until 1995 that the genus was reunited with the nightshade ( Solanum ) by Lynn Bohs , which was initially not recognized by botanists working on morphology. In the meantime, the reintegration has been confirmed by various molecular biological studies and is generally recognized.