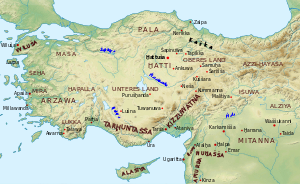 The country of Azzi in northeastern Anatolia is known from the Hittite annals. It was near Ḫayaša or was a province of the same, or both names were used synonymously. That is why the terms Azzi-Ḫajaša or Ḫajaša-Azzi are often found.

A country Azzu is already known from the reign of I. Hattusili known. At the time of Ḫattušili III. the enemy from Azzi had wreaked havoc in the Upper Land and reached Samuḫa . Equating this Azzi with the Azzu of the Ḫattušili is not really certain.

Mursili II led two campaigns to Azzi, the second in his tenth year of reign, after a campaign to Kummanni the previous year. The statistician Huber assumes because of the mention of a solar eclipse in the text KUB 14.4 that this campaign in 1339 or 1334 BC. Took place. Volkert Haas, on the other hand, gives, based on astronomical calculations, the most likely dates June 14, 1312 or April 13, 1308 BC. BC (see also the solar eclipse of Muršilis ). Under Tudḫaliya IV. Azzi, Kaška and Lukka are listed as hostile countries (KUB XXVI 12+ II 15 '). The fortress Ura (not to be confused with the Cilician Ura ) was located near the border with Azzi (KUB 14.17i ii 21-4, w. And KUB2 6.79 i 15-17, duplicate).

The following important information is missing from this section:
There are certainly more attempts at localization than Ms. Sagona's
Help Wikipedia by researching and pasting it .

Claudia Sagona wants to locate Azzi in the Erzurum area . Aripsa was on the "sea", here Lake Van , the plain of Erzincan and the Black Sea come into question.

Theories Related to the Amazons

After early as 1910 John Garstang , the term Amazons for a female-dominated, small Asian nation of Greek mythology had brought the country Azzi in conjunction, the historian led Frederick Cornelius Amazones concrete from the composition of the , a term for wife or mother in many languages , in combination with Azzi-udne (Hittite for country of Azzi), whereby he assumed that the Hittite form he adopted am-azziudnejas (= "woman of the Azzi country") was used by the Greeks in folk etymology in Amazones (including the possible meaning "the breastless") were changed. While Cornelius' etymological derivation of the Amazons found little positive response in specialist circles and evidently also spread, his further, very speculative statements that women actually took over power in Azzi, which towards the end of the 13th century BC. B.C. had become a serious threat to the Hittite Empire, received no attention, his theory found quite wide dissemination in popular scientific literature up to popular culture. The ancient orientalist Ahmet Ünal has recently also represented an etymological connection between the Amazons and Azzi .