The title of this article is ambiguous. Further meanings are listed under BÖ . 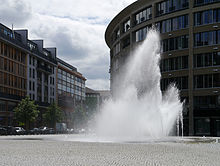 A gust forces the fountain out of its symmetry.

A gust or squall (to Dutch bui and probably onomatopoeic origin) is a violent air movement (wind shock) short-lived.

In meteorological terms, a gust is used if the measured ten-minute mean value of the wind speed is exceeded by at least 5.0 m / s (10 kn ) within a few seconds (maximum 20, lasting at least 3 seconds)  .

In 1962, the defined World Meteorological Organization (WMO), a gust of wind ( English squall ) as follows: The wind has the speed to 8 m / s in a short time increase and hold for one minute, a minimum speed of 11 m / s.

From a physical point of view, the gust actually corresponds to a shock , i.e. a rapid change in the increase in wind speed (the acceleration of the wind).

During storms, a long-term mean peak wind speed is measured on the one hand, and a maximum peak gust on the other . Since these are usually the actual damaging events, these peak gusts make an additional statement about the severity of the storm. This is why one speaks, for example, of "storm with gusts of wind".

If the gusts occur within a linearly arranged area, this region is called the gust front . Some gusts that occur regularly have their own names, for example the Boorga in Alaska. Gusts with a vertical flow direction are referred to as falling gusts . In thunderstorms, strong gusts of force close to the ground are referred to as downbursts , they can leave tornado-like damage patterns. A special weather phenomenon that lead to high waves at sea and can be fatal due to the sudden storm for sailing ships, the White Squall ( white squall ).

Gusts are examined, among other things, with a gust recorder which, in contrast to the anemometer, only records the current wind speed, but not the direction of the wind.