from Wikipedia, the free encyclopedia
This is the sighted version , which was flagged on April 2, 2021 . There are 2 pending changes that have yet to be viewed.
Siege of Belgrade (1456)
Part of: Turkish Wars

The Siege of Belgrade ( Kriechisch W (e) yssenburg ), Cosmographia by Sebastian Münster from 1545

The siege of Belgrade (old Hungarian Nándorfehérvár ) lasted from July 4th to July 22nd, 1456. The city, which belongs to the Kingdom of Hungary, came into the field of vision of the Ottoman Sultan Mehmed II after the conquest of Constantinople , and its property would undoubtedly have a good starting point for ceded the further conquest of Hungarian territories.

The defenders of Belgrade were led by Johann Hunyadi , who at that time had already made a name for himself as a "Turkish fighter". The successful defense of the city saved the Hungarian Empire from another direct confrontation with one of the most powerful empires of the time for a while.

Situation in the 15th century 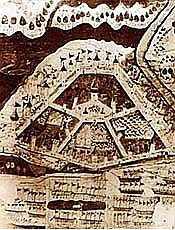 The fortress of Belgrade was strategically located on the southern border of Hungary and the Serbian despotate under Đurađ Branković . From here the only way led from Singidunum in the Hungarian Plain to Constantinople, namely the Via Militaris (military road) , which has been known since late antiquity . Along the Morava and Nišava it led on the one hand via Bulgaria to Thrace on the Bosporus, and after the branch at Naissus over the Vardar to Macedonia.

The fortress of Belgrade had its origin in 535 in the renovation of the legionary camps as border fortifications ( kastron ) on the Danube under Justinian I. After the complete abandonment of the Danube border, the castle of Belgrade was not used as a strategic fort until the 12th century by Emperor Manuel I Hungary established. But only after the battle of Ankara , from which Stefan Lazarević returned under happy circumstances as an ally of the Ottoman sultan Beyazit Yildirim , who had been defeated by Timur , the Serbs began to make the castle as the center of the newly established Serbian despotate through an exceptional building activity in which the parts of the The old castle was used as the city palace of the despot, and was extensively converted into a fortress. A new complex was built with a structural separation of the upper and lower town, which was partially well protected by a double wall ring and a deep moat. The complex used military knowledge of the Byzantines and also benefited from the fortification building art of the Crusaders and the Arabs. Belgrade thus became the strongest fortress on the Balkan Peninsula within two decades.

After it became apparent that Mehmed II was gathering his resources to fight Hungary after the fall of Constantinople in 1453 , Hunyadi, after a public reconciliation with all his enemies, went to Belgrade in 1455 to equip and arm the fortress at his own expense . When he left it heavily fortified under the command of his brother-in-law Mihály Szilágyi and his older son Ladislaus , he formed a relief army and a fleet of 200 galleys . He was supported by the Franciscan Giovanni da Capistrano , who preached the crusade so effectively that Hunyadi's army was reinforced by numerous peasants enthusiastic about the war. The core of the army consisted of mercenaries and noble horsemen.

Fresco of the Siege of Belgrade, 1468

On July 14, 1456, Hunyadi and his flotilla destroyed the Turkish fleet. On July 21st, Szilágyi resisted a violent attack. On the same day, Hunyadi chased the confused Turks into their camp, which he captured after a desperate and violent clash. The wounded Mehmed then lifted the siege and returned to Constantinople. This ensured Hungary's independence for another 70 years.

The of Pope Kalixt III. Due to a historical error , the custom of the noon chime is a reminder of the victory in the Christian countries to this day.