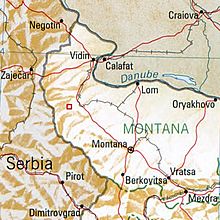 Belogradschik [ ˌbɛɫoɡrɐˈtʃik ] ( Bulgar . Белоградчик ) is a small town in northwestern Bulgaria . The name of the city is derived from belo , "white", and grad , "castle" (today the predominant meaning "city"). The name means something like "White Castle" and alludes to the appearance of the fortress. The city is located about 180 km northwest of Sofia , 70 km northwest of Montana and about 50 km southwest of Vidin . The next rail connection is in Oreschez, twelve kilometers to the southwest .

The city lies at an altitude of 520 meters between the two mountain ranges Veneza and Vedernik belonging to the Balkan Mountains . In the vicinity of the city there is a rock area about ten kilometers long and two kilometers wide with over 200 smaller rock towers made of red conglomerate rock .

The Romans built a fortress into the rocks here as early as the 1st century . This was destroyed and rebuilt several times by the Byzantines, Bulgarians and Turks. The city at the foot of the fortress is first mentioned in a document in 1454. The present fortress was built during the Turkish rule in 1850 under Sultan Abdülmecit I. completed. The exploitation of the local population led to a peasant uprising in the same year, but this was suppressed. Nowadays Belogradchik is developing more and more into a tourist center. The surrounding rocks have been developed for Saxon climbing since the 1960s .

Panoramic view of the rocks near Belogradchik in the evening light