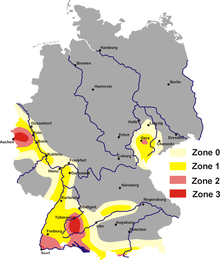 Dimensioning criteria for earthquakes are requirements for the dimensioning of buildings that are exposed to earthquake loads.

The requirements for buildings at risk of earthquakes are set out in DIN EN 1998-1 ( buildings in German earthquake areas ) and must be complied with in some federal states. Additional DIN standards apply to special high-rise structures, such as DIN 19700 for dams such as dams and flood retention basins .

On the basis of the design criteria, it is calculated how a building must be erected within the framework of the requirements that apply to it (dimensions of the load-bearing parts, observance of construction rules). For important structures such as B. Hospitals have stricter requirements than for example single-family houses. A detailed calculation can be dispensed with under certain conditions.

The probability of the occurrence and strength of earthquakes is different for each building area depending on the geological situation; it is determined by a statistical evaluation of the earthquakes that have occurred in the past. The main investigations are the damage ( intensity ) of earthquakes, which can also be derived from historical reports. The direct measurement of the strength ( magnitude ) of earthquakes and the resulting calculation of the forces acting on structures is only possible for earthquakes whose seismogram is available. This has only been the case across Germany since around 1900.

For Germany, earthquakes are divided into four intensity classes in DIN 4919 using the EMS earthquake scale. A dimensioning of structures according to DIN 4149 is only to be carried out for classes 1 to 3. However, it is recommended to carry out such a dimensioning for structures in Zone 0 as well.

On the basis of this evaluation, the responsible geological offices or other qualified bodies create earthquake hazard maps ( earthquake zone maps ). The evaluation of the earthquakes in Germany shows that earthquakes can only be expected in some areas with sufficient probability. Affected areas are the Lower Rhine Bight , the Upper Rhine Rift and the Swabian Alb (especially the Hohenzollern Rift ) in the west and, to a lesser extent, the Gera area in the east .

With regard to the possible damage from an earthquake, a distinction is made between the earthquake load cases "operational (earth) quake" and the "design earthquake ".

The operational earthquake is decisive when dimensioning the structure if the structure has to fulfill special functions at all times, as is the case, for example, in a hospital. For a building structure, this is an earthquake that may cause minor damage to the non-load-bearing elements, but in which the important facilities, e.g. B. a heart-lung machine , must remain operational. The structure must therefore absorb the earthquake in such a way that the deformations decrease again. The maximum size of the deformations that may occur in the event of an earthquake is determined by the restrictions on damage to non-load-bearing elements.

In English the following equivalent terms are in use:

Reaction of the structure

The reaction of a building (response spectrum) to the forces generated by an earthquake, usually acting horizontally in different directions, depends on the construction (e.g. half-timbered , prefabricated house ) and the material (e.g. reinforced concrete , masonry ). The power transmission within the structure has a major influence on the response spectrum, for example through a securely connected and simple supporting structure, the avoidance of differently reacting parts of the building and sufficient resistance to twisting. It is also essential that the foundation of the structure reacts in a uniform manner and that large masses are avoided in the upper parts of the structure.

With the help of the properties of the materials used and the force transmission due to the construction method, the response vibration of a building to the earthquake vibration can be calculated, and thus also the forces occurring within the building. These serve as dimensioning criteria for construction and material.

The reaction of a building depends both on the immediate subsoil (3 - 20 m below the surface) and on the deeper subsoil. In the standard, both indicators are summarized as an S indicator . Without an expert opinion, the most unfavorable subsoil class C is to be used.

The subsoil class is described by means of the loosening caused by weathering :

The condition of the subsoil must be verified for each structure by means of a subsoil report.

The deeper subsurface is divided into three classes

The application of these measures to the given location on the situation is the resulting parameter S .

Importance of the building