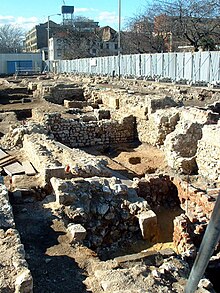 Another view of the excavations from Tower Bridge Road 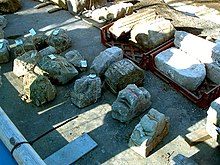 Details of the finds from the excavations 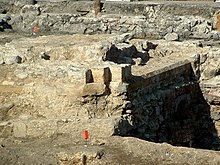 The Bermondsey Abbey was an English Benedictine . Even if most of the mentions indicate that it was founded in the 11th century, its predecessors can be traced back to the early 8th century and were located in what is now Bermondsey Square at Bermondsey Market in Bermondsey (London) in the London Borough of Southwark in the south-east London . The abbey was dissolved in the course of the dissolution of the English monasteries under Henry VIII in 1541 and the land was sold by the king.

A first monastery existed in Bermondsey as early as 715 AD. Bermondsey was at that time a Surrey branch of the important Medeshamstede monastery in Mercia , now known as Peterborough Cathedral . A letter from Pope Constantine (708–715) that has only survived as a copy documents the granting of rights to a monastery in Vermundesei . It is very likely that this monastery - presumably as a minster for world clergy - existed until at least the Viking invasions in the 9th century.

Until 1082 there are no further mentions of a church in Bermondsey, until - according to the Annales Monasterii de Bermundeseia - a monastery was founded by Alwinus Child with royal permission. Traditionally, such monasteries were often built on the foundations of older churches, so this church is likely a direct successor to the church named in the 8th century.

The monastery founded by Alwinus Child is probably identical to the new and handsome church , which is recorded in the Domesday Book 1086 for Bermondsey. The explanation for the “royal permit” can also be found here, since Bermondsey is listed as the property of King William the Conqueror and part of his half-brother Robert, Count of Mortain . Royal support for the monastery continued with King William Rufus making foundations to the monastery in 1089 or 1090. Foundations at Bermondsey are also known from King Henry I in the 1120s and 1130s. The Counts of Mortain also seem to have kept in touch with the monastery, in 1140 Count William of Mortain became a monk here. The only endowments recorded by Alwinus Child to the monastery are various rents in the city of London .

The new monastery was founded as a foreign Cluniac priory until 1089 - probably at the invitation of Archbishop Lanfranc of Canterbury - four monks from Notre-Dame de La Charité-sur-Loire arrived. Their names were Peter, Richard, Osbert and Umbald, and Peter became the first prior. The church remained Cluniac until the late 14th century. In 1380 Richard Dunton, the abbey's first English prior, paid a sum of 200 marks (£ 133.33) to naturalize Bermondsey in order to protect it from measures taken against foreign property during the wartime of those years. In addition, the priory received the independent status of an abbey, which was now independent from Cluny and La Charité from 1390.

Catherine of Valois, wife of King Henry V, and Elizabeth Woodville , wife of King Edward IV, both stayed at Bermondsey Abbey some time after their husbands died. Katharina, who was also the mother of King Henry VI. was exiled to the monastery in 1436 because of her marriage to Owen Tudor . Around February 12, 1487, Elizabeth was registered as the widow of one of the descendants of the monastery founders as a free resident of the monastery, where she died on June 8, 1492.

Bermondsey very soon acquired extensive properties. In 1103 and 1104 it received extensive ownership rights from Henry I in Southwark west of Borough High Street (Stane Street) to the south of the old parish, via Lambeth to the south of Walworth. After the City of London claimed these lands in 1550, they were named King's Manor, Southwark . In 1122 it was given the Church of St. George the Martyr , which led Long Lande northwest of the abbey to the High Street to connect the estates.

In 1291 worldly possessions were valued at around £ 229, and ecclesiastical rights at just over £ 50. The Valor Ecclesiasticus of 1535 sets the annual value of the abbey at just over £ 474.

The estates were extensive and included possessions in Surrey, Leicestershire, Hertfordshire, Buckinghamshire, Gloucestershire, Somerset and Kent. In 1093, Bishop Robert Bloet of Lincoln gave the priory to Charlton , Kent. In 1268 it was awarded a Monday market in Charlton and an annual market of three days around Trinity. Henry I donated lands in Dulwich and other places to the monastery in 1127.

Due to the rebuilding of the area around Bermondsey Square in 2006 there was the possibility of a number of excavations along Abbey Street. Further excavations took place along Tower Bridge Road .