The title of this article is ambiguous. For the politician of the same name, see Bernhard Lauer (politician) 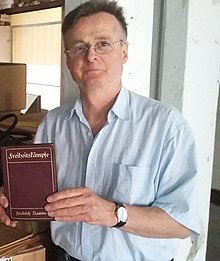 Lauer attended elementary school in Britten and graduated from the Staatliche Realgymnasium Merzig (Saar) in 1973 . From 1973 to 1983 he studied Slavic and Romance philology in Marburg , Giessen , Moscow , Belgrade and Bucharest and received his doctorate in Marburg on the Russian symbolist poet Fedor Sologub . Subsequently, through the mediation of the Marburg Slavic Studies professor Hans-Bernd Harder (President of the Brothers Grimm Society), he became an employee of the 200 Years Brothers Grimm event companywho was responsible for exhibitions, a four-volume catalog and other projects in connection with the 200th birthdays of the Brothers Grimm (January 4, 1985 and February 24, 1986). In the meantime he worked as a university assistant at the Philipps University of Marburg.

In August 1989 Lauer succeeded Dieter Hennig as managing director of the Brothers Grimm Society in Kassel and around the same time, also as successor to Hennig, head of the Brothers Grimm Museum in Kassel. With the closure of the museum in 2014, his activity as its director ended; but he remained managing director of the Grimm Society. He has been a member of the Historical Commission for Hesse since 2013 .

Lauer participates in many different international activities and exhibitions for the Brothers Grimm, among others in Belgium, Bulgaria, France, Greece, Italy, Japan, Kazakhstan, Croatia, Lithuania, Poland, Portugal, Romania, Russia, Switzerland, Spain, Taiwan, Czech Republic and the United States. Under him as managing director of the Brothers Grimm Society, among other things, at the request of the board of directors, the hand copies of the Grimm children's and house fairy tales were declared World Document Heritage by UNESCO , the historic Palais Bellevue , in which the Brothers Grimm Museum was housed, renovated and the critical edition started with works and correspondence of the Brothers Grimm in the "Kasseler Edition". He is also active as an author and editor of scientific and popular publications on the Grimms at home and abroad and in many languages. He has been editor of the yearbook of the Brothers Grimm Society since 1991 .

In the summer of 2005, Lauer founded "based on Johann Gottfried Herder's 'Kritische Wälder' in Kassel the publishing house 'Neue Kritische Wälder', which deals particularly with cultural border and transition areas in Europe".

In connection with the recognition of the hand copies of the children's and house fairy tales of the Brothers Grimm as world document heritage , which he initiated , Lauer was assumed in the mid-2000s to have misrepresented the tradition and ownership of the Kassel hand copies of Grimm's works. The Grimm Society has published an opinion by the presiding judge at the Hessian administrative court Eckehart Blume on the ownership structure . Publications in the press, radio and internet responded to the discussions.