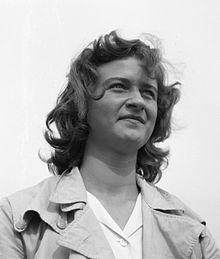 At the European Athletics Championships in 1950 , she was fifth over 200 m in 25.0 seconds. In the 4 x 100 meter relay , she won the silver medal with the Dutch team in 47.4 seconds behind the relay from the United Kingdom.

At the Olympic Games in Helsinki in 1952 , she won the silver medal over 200 m in 24.2 seconds behind the Australian Marjorie Jackson in 23.7 seconds and in front of the Russian Nadeschda Chnykina , who also ran 24.2 seconds. With the Dutch relay, Brouwer reached the final and finished sixth, in the 100-meter run she was eliminated in the semifinals.

In the 100-meter run, now starting as Bertha van Duyne, she won silver at the 1954 European Championships in Bern in 11.9 seconds behind Irina Turowa from the Soviet Union.

In 1956 she was nominated for the Olympic Games in Melbourne . After the team management of the Netherlands had canceled participation in these games because of the Soviet invasion of Hungary, van Duyne could not start either. She ended her career shortly afterwards.