On Bloody Sunday in Ireland of 1920 ( English Bloody Sunday , Irish Domhnach na Fola ), November 21, several acts of violence were perpetrated in Dublin , Ireland during the Irish War of Independence , with around 30 dead and many injured. The day began with the murder of several British agents and their informants by the Army of the Republic . In the afternoon , British forces retaliated with a massacre of spectators and players at a Gaelic football event in Croke Park , a stadium in the north of the city.

Bloody Sunday occurred during the Irish War of Independence (1919–1921), which followed the unilaterally proclaimed declaration of the independent Irish Republic and the Irish Parliament ( Dáil Éireann ). The then Army of the Republic (now often called the "Old IRA ") fought a guerrilla war against the Royal Irish Constabulary (RIC), their auxiliaries and the British Army , which were designed to suppress Irish separatists. In return, the British government formed its own paramilitary groups, the Black and Tans (so called because of their black and brown uniforms) and the Auxiliary Division (also called Auxiliaries or Auxies ). The behavior of these groups in Ireland quickly gave rise to controversial discussions; a major critic was King George V , who condemned the brutality and violence against the entire Irish population. The group of auxiliaries is responsible for the Bloody Sunday massacre. 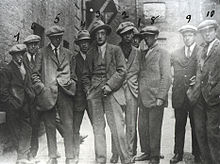 In November 1920, Michael Collins , Treasury Secretary and head of the Irish Republican Brotherhood , ordered the murder of the so-called "Cairo Gang", twelve high-ranking British agents who were set up to infiltrate and subvert Irish nationalist organizations. On the night of November 21, the special unit "Squad" founded by Collins killed all twelve men - some in their own homes, others in front of their families. Two auxiliaries were shot while fleeing by the squad. This action set the British agent activity in Ireland far back. Many other spies and the rest of the gang fled to Dublin Castle , causing consternation within the British administration.

Collins justified his order (which could only be partially executed) on the grounds that the British agents had acted without legal process and therefore were not entitled to legal process.

For the Gaelic football team from Dublin, a game against the team from County Tipperary at Croke Park Stadium was scheduled for the later day . Later, one of the auxiliaries involved in Bloody Sunday reported that a coin had been tossed as to whether to go on a murder spree in Croke Park or to pillage Sackville Street (now O'Connell Street ) instead .

Despite the discomfort in Dublin from the morning IRA killings, the war-weary people got on with their daily lives. About 10,000 spectators therefore gathered in Croke Park to watch the game. However, the field of play was surrounded by British units, and within minutes of the start of the game an aircraft was flying over the field, from the cockpit of which a red flare was launched. Auxiliaries streamed onto the field as a senior officer fired a revolver round. The group began shooting into the crowd from the field while another fired a submachine gun from the entrance. The crowd began to recede. Two players, Michael Hogan and Jim Egan, were shot; Hogan later died of his injuries. A young man from Wexford trying to offer a prayer to the dying Hogan was also killed. A total of 14 people died and 65 were injured. Among the victims were Jeannie Boyle, who attended the game with her fiancé five days before their wedding, and 14-year-old John Scott, who was so mutilated that it was initially suspected that he had been stabbed with a bayonet . The youngest victims were ten and eleven years old. There were no casualties in the British police force. During the subsequent searches, only a discarded revolver was found.

The acts of the auxiliaries, as well as those of the Black and Tans, were never "officially" authorized and were always condemned by the British leaders from Dublin Castle . In order to cover up the behavior of the British forces, the following press release was issued:

A number of men came to Dublin on Saturday under the pretext of watching the Gaelic football game between Tipperary and Dublin. But their real purpose was to carry out the series of murders that had taken place in Dublin that morning. Having learned the day before that a number of the perpetrators would be present at Croke Park, royal troops stormed the stadium. It was originally planned that an officer should go into the middle of the field and use a megaphone to call the killers to surrender. But when the stadium marched in, shots were fired to warn those wanted. They then created chaos in the crowd and escaped in confusion.

But the Times newspaper ridiculed the Dublin Castle version, as did a British Labor Party delegation visiting Ireland at the time.

Later that day, two senior IRA officers, Dick McKee and Peadar Clancy , and their uninvolved civilian friend Conor Clune, were arrested elsewhere. They were taken to Dublin Castle and shot "while trying to escape". The official version was that due to a lack of space in the cells, the arrested were locked in a guard room that happened to contain weapons. They were shot while attempting to flee by armed forces.

The behavior of the auxiliaries and the Black and Tans during the Irish War of Independence , most of which was tacitly officially approved, led the Irish public to turn against the Crown. Some British politicians, and even the King himself, made no secret of their disapproval of the behavior. The indiscriminate killing of women, children and men made headlines in all international newspapers and damaged the credibility of the British.

The combination of the loss of the “Cairo Gang” and public opinion against Bloody Sunday damaged the hegemony of British rule in Ireland and led to increased support for the Republican government under Eamon de Valera .

There were two court martials over the massacre; one stated that "the RIC fired without orders and acted beyond the requirements of the situation". Major General Boyd, Dublin District Commander, added that, in his opinion, "the shooting into the crowd was without order, indiscriminate and unjustified, other than the shooting outside the enclosure". The findings of these courts were suppressed by the British government and did not come to the public until 2004 (book by David Leeson, April 2004).

This text is based on a translation of the article Bloody Sunday (1920) from the English Wikipedia in the version of June 25, 2005 .