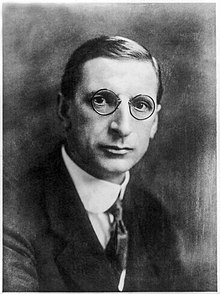 De Valera was the son of the Cuba-Spaniard Juan ("Vivion") de Valera, born in 1853 in the Spanish Basque Country, and his Irish wife Catherine ("Kate") Coll in Manhattan / New York as George De Valera (1910 change of name to Edward ) born. From the age of 2, he grew up with his maternal grandparents in Knockmore in the Irish county of Limerick . He attended school there and then studied mathematics at Blackrock College in Dublin . After completing his studies, he became a professor and teacher of mathematics at various universities and schools.

During this time he also made first contacts with the Irish national movement. He learned the Irish language and in 1908 he joined the officially apolitical, but actually functioning as a collecting tank for nationalists, Conradh na Gaeilge (English Gaelic League ). In 1913 he was a founding member of the paramilitary Irish Volunteers . In 1916 he took part in the Easter Rising in Dublin against British rule in Ireland and was arrested and sentenced to death when it failed. However, since he was born in the United States and therefore had US citizenship , this sentence was commuted to life imprisonment, which he only partially served in Sussex .

The establishment of the Irish state

In 1917 he was granted an amnesty and took over the chairmanship of Sinn Féin and a little later that of the Irish Volunteers. In May 1918 he was arrested again and elected to the British House of Commons while serving Sinn Féin . De Valera fled, however, and settled in the United States, where he extensively promoted the Irish struggle for independence.

When in 1919 the new, not recognized by the UK, Irish Parliament Dáil Éireann met, De Valera was in April after Cathal Brugha , who had kept the post for him for the second Irish Prime Minister under the title Príomh Aire or President of the Dáil Éireann voted . In August 1921, the Dáil elected him President of the (officially unrecognized) Irish Republic . When the Irish War of Independence ( Anglo-Irish War , Black-and-Tans War ) began as a result of the unilateral declaration of independence by the Dáil Éireann , de Valera traveled to the USA to receive - extremely successful - financial and - less successful - political support for the to find Irish rebels.

The Anglo-Irish treaty signed in 1921 under the direction of Michael Collins , which among other things meant the division of the island into an independent Free State and Northern Ireland , still part of the United Kingdom , was not recognized by many Irish, including De Valera. He resigned as President, followed by Arthur Griffith as President of the Irish Republic and Michael Collins as Chairman of the British Legitimate Provisional Government, and led the rebels against the new, regular Irish Army in the Irish Civil War that followed. As early as August 1922, William Thomas Cosgrave became the new head of government, after the Anglo-Irish Treaty came into force under the title of President of the Executive Council, after Griffith and Collins (the latter shot in an ambush) both died in the same month. In 1923 de Valera ordered that his people lay down their arms, which ended the civil war. De Valera had decided together with companions that the road to complete Irish independence could only be followed by parliamentary , not by military means, which is why he became the political adversary of Cosgrave in the next few years.

In 1926 he founded the Fianna Fáil party , mainly from Sinn Féin members , and became its chairman. In 1932 his party became the strongest force in the Irish Parliament and De Valera was elected President of the Executive Council in WT Cosgrave's place. One of the first official acts of the new government was the abolition of the Irish Parliament's oath (Teachtaí Dála) on the British crown, which was enshrined in the Anglo-Irish Treaty . In 1937 he had a new constitution introduced, according to which he was now Irish Prime Minister ( Taoiseach ). He held the office of Taoiseach continuously until 1948 and then twice (1951–1954 and 1957–1959). De Valera was Irish President from 1959 to 1973.

Éamon de Valera, President of Ireland, is received in the Oval Office by Lyndon B. Johnson (1963) 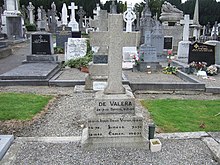 De Valera is considered one of the most influential Irish politicians of the 20th century. He was probably the most charismatic celebrity in Ireland of his time and a leader. Its political and ideological legacy is highly controversial today. Under his leadership, Ireland developed into a state that was formally democratic, but internally repressive and quite isolated in terms of foreign policy.

De Valera's neutrality in World War II (arguably due to its aversion to Great Britain) was very controversial. De Valera was the only head of government in the world who gave condolences to a German embassy after Adolf Hitler's suicide . In 1946 Valera turned to the British Embassy and protested against the death penalty at the Nuremberg Trials of the major war criminals . Separately, the Irish Army and the Secret Service worked closely with the Allies during the war.

The Irish constitution of 1937, which is still valid today, which replaced the office of Governor General with that of President and which prescribed the symbolic use of the Irish language , which is only used in everyday life in a few areas of Ireland , goes back essentially to de Valera. The declaration of independence of Ireland with the exit from the Commonwealth of Nations in 1949 was decided by his adversary John A. Costello when de Valera's party Fianna Fáil was in the opposition for the first time.

Economically, these long years brought little progress for Ireland, and mass emigration , especially of young people, continued. Large parts of the internal life of the state were geared towards self-sufficiency in political and cultural terms. De Valera's basic response to the existing identity problems of Irish society was to revert to what he saw as its own cultural tradition. This largely corresponded to the strongly idealized Ireland of an unspecified prehistory, in which England still had no influence on Ireland.

At the same time he was often able to sell his ideas as ideal politics for Ireland. A predominantly agricultural country, in which the family formed the central element of society and in which the children learned the wisdom of the older generations by the fireplace in the evening, was therefore the social ideal propagated almost omnipresent with modifications. On the one hand, however, this did not allow other ideas and concepts, on the other hand, in view of the economic misery itself, it did not work. Cultural life was at least partially dominated by the censorship . Much of the basic decisions for this policy are attributed to De Valera himself. Nonetheless, De Valera in particular contributed to Ireland remaining a largely democratic country, unlike many other ex-colonies, during these politically and economically difficult decades.

President of the Republic of Ireland

Foreign Minister of the Republic of Ireland

Minister of Education of the Republic of Ireland

President of the League of Nations Assembly