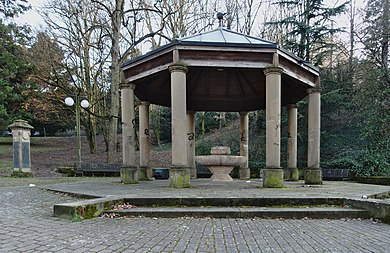 The Bopserbrunnen in Stuttgart, Swabian Bopserbrünnele, is a fountain in the Bopser district of the Stuttgart-Süd district . It is located in the listed Bopseranlage, a mixed tree population in a U-loop of Hohenheimer Straße, surrounded by the traffic of the federal highway B27 .

An octagonal pillar pavilion surrounds the goblet-like travertine bowl of the drinking fountain. The fountain's mineral water source was discovered in 1762. Since 1951, the well has been fed from the municipal drinking water network. The well was later shut down.

The bopser system with the bopser fountain nestles in a U-loop of Hohenheimer Strasse up to Etzelstrasse. Hohenheimer Straße branches off here into the hairpin bend of Neue Weinsteige with Ernst-Sieglin-Platz. The Hohenheimer Straße and the Neue Weinsteige together form a rising section of the B27 federal highway , which climbs about 200 meters from Charlottenplatz in the city center to Stuttgart- Degerloch . The bopser system is located at a height of 320 meters above sea ​​level . The Bopser tram stop is located in the immediate vicinity of the Bopser system, from where the tram passes under the Bopser system in a tunnel. It can be reached via the U5 (Leinfelden), U6 (Fasanenhof), U7 (Ostfildern) and U12 (Remseck) lines.

Until 1964, the Villa Weißenburg rose south of the Bopserbrunnen beyond Hohenheimer Strasse . It was on a hill 40 meters higher in Weißenburg Park and, together with the Bopser fountain, formed a popular motif for photographers and artists, see for example: Drawing by Eduard Mörike from 1856 .

The area of ​​the Bopseranlage rises 20 meters from Etzelstraße to the south. The facility covers an area of ​​about 90 ares, which is predominantly made up of trees. If you enter the Bopseranlage near the tram stop on Etzelstraße, you will come across the Friedrich List monument. Behind it is a large playground with colorful wooden animal figures, a fountain, climbing tower, slide, hammock, cable car, swings and small carousel. A staircase leads from the playground to an elevated viewing platform on a slope. A paved path leads from Etzelstraße to the Friedrich-List-Monument and parallel to Hohenheimer Straße to the Bopserbrunnen, then in an ascending U-loop to the exit at Hohenheimer Straße 84. The facility is equipped with a large number of seats, at Friedrich-List -Monument and at the Bopser fountain are seating groups with several rows of benches.

On the embankment to the right of the entrance on Etzelstrasse is a tombstone for a soldier who lost his life at this point almost at the last minute of World War II. An inconspicuous triangular rock bears the following inscription on the reverse:

The fountain's drinking hall, designed as a pavilion, has its own house number: Hohenheimer Straße 80. The 5 meter high pavilion was built on an octagonal floor plan with a diameter of 7 meters on a partially stepped platform with a diameter of 11 meters. The pavilion rises on 8 columns with a cylindrical base and a Doric capital.

A wooden beam supports the sheet metal-clad pyramid roof, which ends in a wind vane at the top. This carries a four-axis compass rose with the first letters of the cardinal points and a rotatable ball at the end. An arrow to indicate the wind direction goes through the sphere. At one end it carries a jumping horse made of tin, the Stuttgart heraldic animal.

Behind the pavilion there is a row of benches to sit on and a playground to play. A little to one side is the Bopser memorial stone, a classicist stele with a square floor plan, pillars at the corners and a double-storey pyramid roof. The stele bears a bronze plaque from the Stuttgart Beautification Association with explanations of the history of the "Bopserbrünnele" and a bronze plaque from the city of Stuttgart with explanations about the Bopser .

The Friedrich List monument is located at the entrance to the Bopseranlage on Etzelstrasse. The monument was donated in 1905 by the state association of Württemberg traffic officials in honor of Friedrich List , the national economist, railway pioneer and pioneer for the German customs union . Friedrich List, who was born in Reutlingen, was employed as a senior auditor at the Ministry of Finance in Stuttgart after his studies, before he was appointed professor at the University of Tübingen in 1817. The bronze bust of the monument was created by the Stuttgart sculptor Daniel Stocker . It rests on a stone pedestal with the inscription "Friedrich List".

The rich, partly old tree population of the Bopseranlage goes back to the first urban plantings in 1822. It mainly consists of various kinds of deciduous trees, including maple, hornbeam, copper beech, chestnut, linden, oak, plane tree and poplar. Yew trees and false cypresses can be found on conifers. There are also individual noteworthy specimens of the trumpet tree, tree of gods, gold-bubble tree, tulip tree and giant tree of life.

A detailed overview of the mapped tree population is provided by the Stuttgart city map "Stuttgart Maps" under the topic "Nature & Environment" in the Trees section.

A predecessor to the Bopserbrunnen already existed at the beginning of the 17th century, but "considerably above today's". The copper engraving " Bey Stutgart " by Matthäus Merian from 1624 shows the fountain in a valley cut below the ruins of the Weißenburg . The simple well consisted of a well column and 4 well troughs placed one behind the other.

In 1762, while digging for china clay, a mineral spring was discovered at its current location and the spring was put in a well. In 1822 trees and bushes were planted on the site. This is how the oldest green space on Stuttgart soil was created. In 1840 an octagonal stone pavilion was built on pillars above the current fountain. It was replaced in 1884 by a cast-iron pavilion based on a design by City Planning Councilor Adolf Wolff . At the same time, the park was renewed. In 1939 the pavilion was melted down and only the travertine fountain remained. In 1951 the well was connected to the drinking water network. In 1991 the old stone pavilion was rebuilt over the travertine fountain.

In 1896 H. Frölich reported: “Behind the fountain was the so-called 'Grove of Sighs', now cut down, made of fir trees, in which many a tired of life once thought they had to extinguish their life. Hence the folk song of the 'Bopsergeist' that was often heard earlier: "

“He comes most of the time in the full moon.
A man from Ruither on his way home saw
him there in the intoxication.
The spirit appeared to him like an image that was
wrapped in a white shroud etc. "