Under Brownianism means a medical reform movement of the neurophysiological body and disease concept of the Scottish physician John Brown runs out (1735-1788), which was published in 1780 by him from 1790 aroused to 1800 throughout Europe attention and especially among the practical Physicians became very popular as an alternative to traditional therapy. According to this concept, only a state of moderate arousal is healthy, which is why any disease should be treated with either stimulation or sedation.

Brownianism sees human being's “excitability” as a fundamental physical property, which is mediocre in healthy people. Excitability is the innate ability to be aroused by stimuli . With excessive excitability (sthenia) or inadequate excitability (asthenia), the person becomes ill. Illness is just a sthenic or asthenic deviation from the mean norm of nervous excitement ( ancient Greek σθἐνος (sthenos) = strength, strength). Health is the balance between stimuli and irritability. An extreme reduction in stimuli produces asthenia as an inability, weakness and rapid fatigue during greater physical or mental exertion. An increase in stimuli produces, to a certain extent, sthenia in the sense of improved motivation. Death occurs when the excitability becomes too high or too low. According to this theory, all diseases can be classified between these two extremes. Diseases that are due to excessive excitability, Brown called sthenic diseases that are due to insufficient excitability asthenic (underexcitation). With this concept, Brown takes up Albrecht von Haller's theory of irritability and processes the influences of his teacher William Cullen .

According to this model of thought, human excitability is exhausted by too frequent arousal, which then causes illness. The less stimuli act on a person, the more the excitability accumulates.

Mania represents too much excitability and can therefore be described as a sthenic disease. It is caused by a brain defect or excessive stimuli or passions . These passions can also increase to such an extent that the excitability itself is affected and ultimately destroyed. This leads to an asthenic condition, which manifests itself in epilepsy or a stroke .

In contrast to this, melancholy represents too little excitability. It can therefore be described as an asthenic disease.

The therapeutic principle results from the theory. It consists in the use of counteracting means, which are to be understood either as stimuli or as moderation of stimuli. These remedies consist of dietary prescriptions as well as chastisements and the arousing of passions. They thus fit into the repertoire of moral treatment . Until the middle of the 19th century, "asthenic" diseases were treated with stimulants, "sthenic" with sedatives.

Brown divided the stimuli that were causal for him into strongly arousing ones such as meat, alcohol, opium , but also affects, as well as into reducing stimuli such as vegetarian food and physical rest. In case of over-excitability, he prescribed sedatives , bloodletting , laxatives or emetics ; in case of under- excitability, he prescribed stimulants such as musk , camphor , opiates, and alcohol. 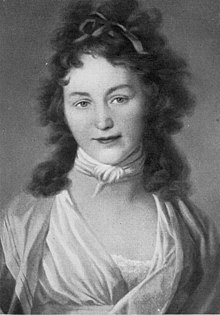 Brown's teaching was hardly received in England, but was all the more violently received in Germany. Your influence can be seen a. because there were violent clashes between supporters and opponents at German universities. Of the numerous followers (including natural scientists and idealistic natural philosophers from the German Romantic era ), Schelling (see section on web links below ) and Novalis should be mentioned here . Novalis took up Brown's thoughts, according to the romantic predilection for the dialectical contradiction of terms such as 'sensitivity and illness', 'freedom and violation of nature' or 'day and night' (in symbolic meaning for reason and rash):

The night is twofold: indirect and direct asthenia. The former is caused by glare: excessive light, the latter from a lack of adequate light. So there is also a rash due to a lack of self-stimulation and a rash due to an excess of self-stimulus - there an organ that is too coarse, here too delicate. The former is raised by reducing the light or the self-stimulus - the latter by increasing it, or by weakening and strengthening the organ. The night and rash from want is the most common. The recklessness from excess is called madness. The various directions of excessive self-stimulus modify the madness .