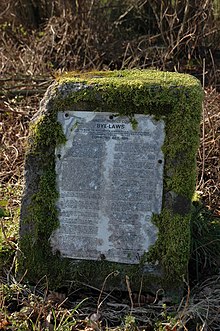 Byelaw in full on a blackboard in Hopley's Green, Herefordshire

A byelaw (sometimes written by-law or bylaw) is a law in the United Kingdom that can be passed by a municipality and has only limited local validity. Since violating Byelaws can be a criminal offense and will be tried in the Magistrates' Court , these laws must be approved by the relevant government agency . Byelaws are similar to the statutes existing in Germany under public law .

Local laws usually apply to very limited areas or locations, for example a park , a public square, or specific community activities such as events or behavior in public transport.

In addition to local communities, park regulatory agencies (such as the National Park Authority) and the Department of Defense (for land owned or managed by the ministry) can pass local laws. Transport companies - such as railway companies - can also issue such regulations.

Byelaw violations can result in fines ranging from £ 500 to £ 2,500. Since 2006 efforts have been made to replace court hearings with fixed fines (Fixed Penalty Notice), which would mean that municipalities would no longer have to have the regulations approved by the government authorities.

Local councils (Local Councils) have, as long as these arrangements are not already covered by other laws by the "Local Government Act 1972" the right to enact local laws. After a decision in the municipal council, the law has to be announced in a local newspaper and is then forwarded to the responsible government authority for approval, which also decides on the date of entry into force. Every citizen has the right to appeal the Byelaws or have it reviewed in court if they have been fined.

With many byelaws, municipalities are trying to enforce special regulations in public spaces, for example the consumption of alcohol in public places or fishing in municipal waters. Feeding birds in Trafalgar Square in London is also prohibited by a byelaw.

Some of these regulations are now covered by the Anti-Social Behavior Act 2003. In July 2010, Interior Minister Theresa May announced that she wanted to reform these requirements again in favor of local, community-oriented measures.