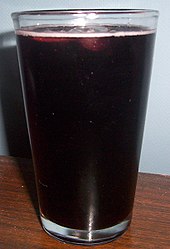 Calimocho [ kaliˈmotʃo ] (possibly derived from the Basque spelling kalimotxo ), in German sometimes corrupted too bald pussy or cold pussy , regionally also Korea, Mussolini or Bambule (in Croatia bamboo ), is an alcoholic mixed drink from Spain, half of which is served Red wine and cola , whereby the alcohol content depends on the red wine used and the proportions of caffeine , phosphoric acid and sugar are determined by the cola used. In Eastern Austria people speak of Cola Red , Bonanza or Fetzi or Cola White when white wine is used. The terms are also used in Rheinhessen and the Palatinate.

Calimocho is drunk cool. In the summer, cooling is often done with ice cubes.

In some regions you often add a dash of blackberry or kiwi liqueur , lemon juice, vodka or rum . Furthermore, the red wine can also be replaced by white wine (cola-white), or the cola by lemon or orange lemonade . The mixture is then called Pitillingorri, Caliguay, Mischmasch (in Croatia) or Naranjocho (based on naranja , "orange").

However, the most common variant is potash , in which one liter of wine per person is mixed with one liter of a water-cola mixture. The potash is mainly used at botellón , a meeting where teenagers and young adults drink large amounts of alcohol together.

In Luxembourg, cola wine is a mixed cola drink. It is traditionally prepared with white wine and served in a 33 cl "tankard glass". The mixing ratio is traditionally 1 to 1. The addition of lemon wedges and ice is also popular.

The origin of the term calimocho is unclear. What is certain is that the drink was called Rioja libre or Cuba libre del pobre (“ Cuba Libre for the poor”) in the 1970s, depending on the region . In 1972 the term Kalimotxo appeared for the first time in Getxo (Spanish Guecho , Province of Bizkaia , Basque Country ) . The term Calimocho has been known throughout Spain since the early 1980s at the latest .

The spelling of the mixed drink varies depending on the region . However, the pronunciation is identical in all cases.