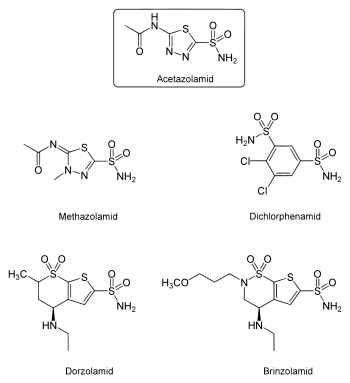 Dorzolamide and Brinzolamide are used in the superficial treatment of glaucoma.

Other drugs with an inhibitory effect on carbonic anhydrase are the anticonvulsants sultiam , topiramate and zonisamide .

Carbonic anhydrases occur in the proximal tubular cells of the kidney. They are responsible for the excretion of protons (H + ). An inhibition of this excretion leads to a lower reuptake of bicarbonate (HCO 3 - ) and sodium ions (Na + ) and thus a reduced reuptake of water . As a result, more water is excreted.

Since this mechanism mainly takes place in the proximal tubule, the increased amount of water that occurs in the distal tubule is absorbed to a greater extent in a compensatory manner , which reduces the effect of the carbonic anhydrase inhibitors.

In addition, the increased loss of sodium ions leads to increased retention of Cl - and increased excretion of K + . This results in hypokalaemia (too little potassium in the blood) and hyperchloremic metabolic acidosis , which lowers the pH value in the kidneys and thus drastically reduces the effect of carbonic anhydrase.

Since carbonic anhydrase inhibitors have only a minor diuretic effect and more effective alternatives are available, they are no longer used as such today. Their main area of ​​application is in the treatment of glaucoma , mostly locally as eye drops.

They can be used to raise the pH of the urine as this increases the solubility, and therefore excretion, of uric acid , cysteine, and other weak bases. However, this can only be maintained for a longer period of time with simultaneous administration of bicarbonate. In the case of metabolic alkalosis as a result of the administration of diuretics, carbonic anhydrase inhibitors can help to normalize the pH of the blood again.

Increased intracranial pressure in altitude sickness can be treated with acetazolamide, as this inhibits the formation of new CSF and also lowers the pH of the same. For the treatment of idiopathic intracranial hypertension , acetazolamide is the medication of choice in many neurological centers. Carbonic anhydrase inhibitors are also used to increase phosphate excretion in hyperphosphataemia .

The inhibition of carbonic anhydrase is also used in the treatment of epileptic seizures. The best-known anticonvulsant from this group of substances is sultiam . Acetazolamide is used relatively rarely, mostly as a concomitant medication in difficult-to-treat seizures or in status epilepticus . The newer anticonvulsants topiramate and zonisamide also have - in addition to other mechanisms of action - an inhibitory effect on carbonic anhydrase. This inhibitory effect leads to tissue acidification , which in turn can reduce the excitability of nerve cells .

Carbonic anhydrase inhibitors should not be used in the case of impaired kidney or liver function, as the reduced excretion of ammonium in the kidneys could lead to hyperammonaemia and hepatic encephalopathy .

Caution is advised with allergies to the sulfone group , with emphysema and during pregnancy . In the case of long-term use, due to the resulting loss of potassium, care must be taken to ensure a sufficient supply of potassium.

In the late 1930s, there was increasing evidence that patients treated with sulfonamides for bacterial infections had increased urination. It was found that this effect is due to an inhibition of carbonic anhydrase in the kidney. Starting from sulfanilamide , the search for substances that could be used as diuretics began. Acetazolamide was also found. Because of their greater effectiveness, thiazide diuretics began to supplant carbonic anhydrase inhibitors as the diuretic of choice in the 1960s.