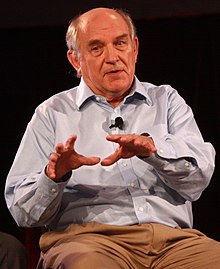 Charles Murray (* 1943 in Newton (Iowa) , USA) is an American political scientist and publicist. He was best known for his book The Bell Curve , which he wrote with Richard Herrnstein . He has been with the American Enterprise Institute since 1990 .

Murray was born in 1943 in Newton, Iowa , USA , where he also grew up. He joined the Peace Corps and worked in Thailand from 1965 to 1970 mainly with the Village Health Program . After this time he stayed for about three years for field research in Thailand, where he returned again and again in the following years. Charles Murray received his bachelor's degree in history from Harvard University in 1965 and his Ph.D. from Massachusetts Institute of Technology in 1974. in political science. Between 1974 and 1981 Murray worked for the American Institutes for Research (AIR), a private social science research organization, on whose behalf he visited Ethiopia , Nigeria , Senegal and Thailand for field research . From 1982 to 1990 Murray worked at the Manhattan Institute and wrote his first two works Losing Ground and In Pursuit during this time .

Since 1990 he has continued his work at the American Enterprise Institute , for which he spent a lot of time in Great Britain for field tests but also for lectures . He also served as an advisor to the Bulgarian government and the OECD in 1991. He has received financial support from the neoconservative Bradley Foundation for his work on The Bell Curve , which assumes a genetic basis for intelligence .

In 2009 he received the Irving Kristol Award from the neoconservative American Enterprise Institute .

Charles Murray deals with various sociological and political topics in his works. He first aroused public interest in the United States with his book Losing Ground: American Social Policy 1950-1980 , published in 1984. In it he dealt controversially with American social policy, with a focus on President Johnson's in the 1960s. He took the view that the national welfare and social programs that had been launched for the needy had failed to achieve their goal and did not improve the situation of the people, but rather contributed to their deterioration. Murray summarized this development in the formula "More money increases poverty" and advocated the abolition of social assistance .

In his book Human Accomplishment: The Pursuit of Excellence in the Arts and Sciences, 800 BC to 1950, which he published in 2003, Murray ranked what he believed to be the most important scientists and artists in the period between 800 BC. Until 1950. Murray sees Europe between 800 BC. And 1950 as the driving force for social, scientific and cultural progress, which is also reflected in its listing. As a criterion for the importance of the people, Murray uses the number of mentions in historical and biographical reference works and important encyclopedias. In this context, there was also an essay by Murray in “ Die Zeit ”. Noteworthy is the small number of only 42 women named. Murray justifies this on the one hand with the subordinate position that women had in all societies, on the other hand with the typical role as mother, which directs the entire attention of women to the upbringing of children.

In addition to his books and articles in journals, Murray wrote articles in the New York Times , the Wall Street Journal , the Washington Post and most importantly The Public Interest . He himself appeared on the front pages of newspapers and magazines and was invited to appear on political television programs. Furthermore, his name often appears in lists of the most important political scientists who influence the politics of the United States. He has been invited several times to expert surveys in various committees of the Senate, Congress and the OECD.

In 2009 Murray turned against the policies of the then newly elected President Barack Obama and warned in general against a development of the "Europeanization" of the USA that he assumed. According to Murray, this “Europe Syndrome”, as Murray calls it, includes, among other things, a poor attitude towards life that is difficult to associate with religion.

In his study Coming Apart , published in 2012, Murray deals with the drifting apart of the white majority population in the USA into a “new upper class” and a “new lower class”, which hardly have any common ways of life and values.