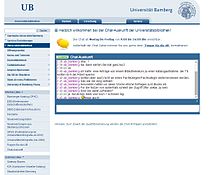 Chat information indicates a digital information , in which by means of chat can be answered questions verschiedenster information type in a synchronous manner.

From a technical point of view, there are three different types of chat today:

The chat information belongs within the library to the digital reference service, which is the organized information service of a library that uses the communication channels of the Internet . In addition to the three forms of IRC, web chat and instant messenger, so-called web contact centers are sometimes used, the software of which, in addition to its usual use in companies, has also been adapted to the special requirements of library needs. These contain a large number of individual applications that offer various options for action - for example the function of cobrowsing , with which the librarian can open websites on the user's computer and thus show him research. This especially plays a role in the possible teaching of information literacy.

In particular, due to the changed search behavior of users due to the rapid development of the Internet, it has become increasingly important that libraries respond to this digital information need by offering an appropriate range of electronic services in order to continue to be perceived as information providers.

One of these services is also chat information, which has been made available in libraries in the USA since the late 1990s . This service makes it possible for the first time to offer a synchronous form of communication over the Internet. For the first time, chat can avoid the often lamented delay as well as the lack of interactivity in the digital information.

In addition, there was also chat information at the headquarters of the Hessian Library Information System (HeBIS), which only answered questions about the HeBIS service.

In 2018 only a few of these offers are still active: Bielefeld, Dortmund, Düsseldorf, Hamburg (Bundeswehr), Trier.