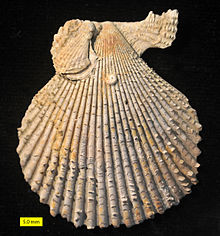 Chlamys is a genus of scallops (Pectinidae) in the order of Pectinida within the class of mussels (Bivalvia). They live or lived exclusively in the sea. The oldest representatives of the genus are known from the Triassic . Many species are intensively fished and are of great commercial importance.

The casings are usually taller than they are long. Both valves are convex; usually the left valve is slightly more arched. The front ear is larger than the back ear. There is a large byssus hole below the front ear of the right valve. The outside is studded with numerous, thorny ribs or bulges, the bulges in turn being studded with finer radial ribs. These radial elements can be crossed by concentric growth ribs and beads. The inner edge has fine radial ribs. The crurs , small appendages on the lock, are poorly developed or absent. The shells are strikingly brightly colored in numerous species. The color can be orange, yellow, pink, purple, brown or white.

Striking on the soft body are the rows of eyes, which are recognizable on living animals as black pigment spots in the folds of the mantle. The animals use their eyes to recognize approaching predators, but presumably also for orientation when swimming.

Chlamys species are sexually separated, the proportion of males to females is 1: 1 or close to it.

The development has been studied in various species, for example in Chlamys hastata . A freely swimming larval stage, the trochophora , hatches from the approximately 70 micrometer large, fertilized egg . This begins to secrete shell material from two dorsal shell fields after about 45 hours of development. After about 50 hours, the transformation into the free-swimming, planktonic Veliger larva is complete. This takes its name from the velum, an oval, lobed organ covered with cilia , which is used both for locomotion and for obtaining food. After about 34 days, the foot is developed, the larvae now often crawl around on the substrate surface, using both muscles and cilia. Larval development is complete after about 40 days, the shell length is then about 240 micrometers. In a rapid metamorphosis, the functional gills develop from small gill systems, mouth opening and foot migrate into the imaginal position.

Sufficient size (around 6 centimeters) for a commercial harvest is reached after 5 to 6 years. The animals can reach an age of 28 to 30 years, a maximum of 35 years. They are then about 8 centimeters tall.

Chlamys species live on the seabed on hard substrates, often also on a sandy bottom with individual stones, to which they anchor themselves with byssus threads . You can detach from the anchorage in the event of unfavorable conditions. Like many Pectinidae, they are buoyant, but do not swim as often and actively as other species in the family (usually with smooth shells). When swimming, breathing water is squeezed out on both sides of the lock so that the animal swims backwards with the lock. The animals come from the surf zone to a maximum depth of about 2,000 meters, but mostly only to about 120 to 200 meters depth.

The old comprehensive genus Chlamys has been divided into numerous sub-genera, which are now predominantly regarded as independent genera. The earlier genus was confirmed as paraphyletic after molecular studies.

The genus in the modern sense only includes the earlier subgenus Chlamys s. st. with the following living (recent) species:

The numerous other species that were previously part of the genus are currently assigned to other genera.

The genus Chlamys in the modern sense presented here is restricted to the North Pacific and North Atlantic, it is distributed in boreal to arctic waters. The genus is widespread and circumpolar, but the individual species have significantly smaller areas of distribution. They are frequent regionally, but in many shallower waters the stocks have become significantly rarer due to overfishing.