Corona Extra ( Spanish for Krone , also Coronita Cerveza ) is a Mexican beer brand that is brewed by Grupo Modelo (majority owned by Anheuser-Busch InBev ). Corona is the best-selling beer in Mexico. It is also becoming increasingly important internationally and is now one of the leading imported premium beers in 180 countries. In addition to water , hops , yeast and barley malt , Corona beer contains corn , rice , papain and ascorbic acid .

Corona Extra was first brewed in 1925 in what was then the Cervecería Modelo brewery in Mexico City . According to his own statements, it was born from the basic idea of ​​creating a beer that does justice to the Spanish crown . Corona is known for its painted-on label, which was created in the 1940s. The symbols of the crown and the griffin are its unmistakable features. The griffin stands for Apollo's mythical protector of the sun and gold. The crown represents the Spanish royal family . 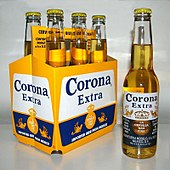 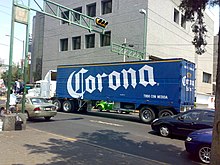 It is the most imported beer in the United States . It is available in a variety of bottle sizes, but also as draft beer and regionally also as canned beer . Particularly small bottles are offered as Coronita (Spanish for small crown ); in Spain all products are sold under this name.

After the Mexican government ordered all non-essential industries to be shut down by April 30, 2020 due to the COVID-19 pandemic , production was stopped for the time being.

In the Siberian Omsk a beer is brewed under the name Sibirische Korona ( Russian Sibirskaja korona ).

According to a report by Deutsche Umwelthilfe from 2012, Corona bottles were sold as returnable returnable bottles in Germany, but not refilled, which violated the deposit ordinance.