from Wikipedia, the free encyclopedia
This is the spotted version , flagged on February 16, 2018 . There is 1 pending change that has yet to be viewed. 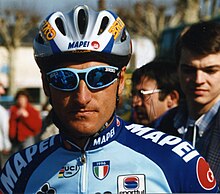 Davide Bramati began his career in 1990 with the Italian cycling team Diana-Colnago , later the Lampre team . From 1997 to the end of his career in 2006, he drove for Mapei , the later Quick Step team .

His greatest success came with the victory of the 17th stage of the Vuelta a España 2000 , when he was able to break away from a five-man breakaway group shortly before the finish. In addition, Bramati won stages in the Tour of Portugal, Tour of Poland , Giro del Trentino , Tour of Murcia and Tour of Aragon during his career .

After the Giro d'Italia 2006 Davide Bramati ended his long career and then became the sporting director of his last team, Quick Step.