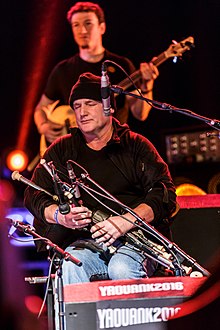 Davy Spillane (* 1959 in Dublin ) is an Irish folk musician and composer. He mainly plays uilleann pipes .

Spillane learned Irish as his first language . At the age of twelve he started playing uilleann pipes, the Irish variant of the bagpipes . With his father he attended numerous festivals in Ireland. In the following three years he played in sessions and met many prominent folk musicians. At the age of 16 he gave his first concerts in the UK and other European countries. In the film The Traveler he played a country driver . In 1978 his music first appeared on a record, the compilation The Piper's Rock . Since then he has composed many of his pieces himself, especially ballads . At the same time he attended the Irish-language school Coláiste Eoin .

In 1981 he founded the folk-rock band Moving Hearts with Christy Moore and Dónal Lunny, among others . The band mainly played self-composed pieces. The instrumental album The Storm , released in 1985, includes several compositions by Spillane. He then teamed up with American musicians such as Béla Fleck and Albert Lee to record the 1986 album Atlantic Bridge , which included bluegrass and blues music . In 1988, Out of the Air by the Davy Spillane Band was released. In 1990 he released the albums Shadow Hunter with Rory Gallagher and fiddle player Kevin Glackin , and in 1991 Pipedreams was released . Spillane then moved to Liscannor in County Clare, Ireland .

Davy Spillane played in the orchestral work The Seville Suite by composer and producer Bill Whelan . Whelan was also the producer of the album Eastwind on which Spillane and Andy Irvine folk music from the Balkans with Irish folk mixed. In 1995 Whelan composed Riverdance , a commercially successful dance show with solo performances by Spillane and other Irish musicians.

Spillane wrote numerous film scores , including for Stormy Passion in 1992 . He often played with other musicians, for example with Mike Oldfield in 1996 for his album Voyager . He also appeared on numerous Afro Celt Sound System albums . After a period of training, Spillane produces its own uilleann pipes. In 2000 his only album with traditionals was released , Forgotten Days , on which Kevin Glackin again participated. In the same year he founded the record label Burrenstone , which publishes jazz-oriented music.

as well as numerous soundtracks and contributions to sessions; for albums with the Moving Hearts see there.