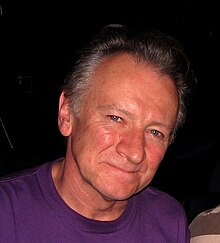 Lunny's mother was from Ranafast, Donegal , his father from Enniskillen . As a teenager, Lunny lived in Newbridge , County Kildare, Ireland . He became a member of the band Rakes of Kildare, which also included his school friend, singer and multi-instrumentalist Christy Moore . They later played together in the folk band The Emmet Spiceland. The single Mary from Dungloe became a number one hit in Ireland, her debut album The First was released in 1968. After the band split up, Lunny met Andy Irvine , who introduced him to the Irish bouzouki , which from then on became his main instrument. In 1971 Lunny appeared on Christy Moore's second solo album Prosperous . Four of the musicians on this album formed the folk band Planxty in January 1972 . In addition to Lunny and Moore, these were Andy Irvine and Liam O'Flynn. This band was style-defining for the next ten years. 1974 Lunny left the band. Together with other musicians like the flautist Matt Molloy and the singers Micheal and Triona Ní Dhomhnaill he founded the band Seachtar. In 1975 Lunny joined the Bothy Band as a guitarist and bouzouki player . This band also shaped the Irish folk. Alongside Johnny Moynihan and Andy Irvine, Lunny is considered to be the musician who popularized the bouzouki in Irish folk.

In 1978, the Bothy band broke up, and Donal Lunny has been a sideman on the album Davey and Morris by Shaun Davey . In 1981 he founded the band Moving Hearts with Christy Moore and Davy Spillane ( Uillean Pipes ) , who recorded not only Irish folk but also jazz and rock elements. Lunny also played synthesizers here . The band broke up in 1985, but got back together in 2007.

After the Moving Hearts ended, Lunny learned mandolin and continued his career as a music producer and accompanist. He has produced albums by Kate Bush , Paul Brady , Elvis Costello , Rod Stewart , Sinéad O'Connor and Clannad .

Dónal Lunny has worked on numerous projects. These include the solo album Donal Lunny , which was released in 1987 and contains instrumental titles by numerous performers that he had composed and arranged. In 1997 he founded the band Wheels of the World , with whom he went on tour in Australia. In 1998 the album Coolfin was released, which was structured similarly to Donal Lunny . In 1999 an album with Maighread and Triona Ní Dhomhnaill was released. From 2004 Lunny led the multicultural project Mozaik with Andy Irvine , to which Nikola Parov , Bruce Molsky and Rens van der Zalm belong, with whom he toured several times and released four albums by 2019. In 2004/95 he also gave concerts with Planxty again. In 2012 and 2013 he appeared as a member of the band LAPD, whose name stands for the first letters of the band members Liam O'Flynn, Andy Irvine, Paddy Glackin and Dónal Lunny.

Dónal Lunny is married to the Japanese musician Hideko Itami. Itami is a founding member of the 1993 band Soul Flower Union and its offshoot Soul Flower Mononoke Summit. You live on the Japanese island of Okinawa , but Lunny is also active in Ireland. Dónal Lunny has four children, including one with Itami and one with Sinead O'Connor. He is a trained silversmith . His brother Mánus Lunny (* 1962) is a member of the Scottish-Irish folk band Capercaillie . 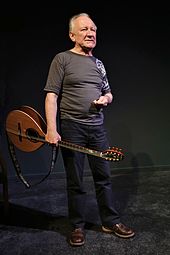 Albums with The Emmet Spiceland