The following important information is missing from this article or section:
complete plot, reception, meaning
Help Wikipedia by researching and pasting it . 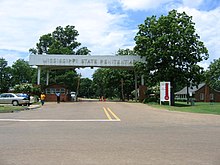 The Chamber (English original title: The Chamber ) is a novel ( thriller ) by the American author John Grisham from 1994. The book was filmed in 1996 with Chris O'Donnell and Gene Hackman under the direction of James Foley as Die Kammer .

Adam Hall, a young aspiring lawyer, takes on the case of Sam Cayhall. He was sentenced to death for a bomb attack on a Jewish law firm in which two children were killed and their father was seriously injured and is waiting in the high-security wing to be executed in the gas chamber .

Adam Hall has little time to save the man who to him is much more than a client, since he is his grandfather. Since the anti-Semite Cayhall, a fourth generation member of the Ku Klux Klan , despises his grandson's liberality and refuses any help, Hall's defense is made difficult to the point of impossibility. Cayhall was only an accomplice in the attack and had no intention of harming people, but refuses to reveal his accomplice.

The first lawyer to represent him in this matter was able to avoid conviction by delaying the trial and selecting white jury members who were potentially well-disposed towards the accused . Cayhall was convicted only in the third trial, pursued by prosecutor David McAllister, who was addicted to profile. After all appointments were rejected, Cayhall is now an old man. The then prosecutor, McAllister, made it to governor at this time and is therefore the one who could grant a pardon .

While Adam Hall makes desperate legal attempts to avert the execution, he must grapple with his family history.