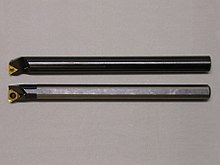 With most turning tools, the shape of the work piece is created by the relative movement between the tool and the work piece. However, there are also tools that at least partially contain the shape of the workpiece as a negative. These include thread turning chisels, thread chasers and dies with which standardized threads can be produced. There are also profile turning tools for profile turning . These are mostly custom-made products in which the desired shape has been ground into the cutting edges from HSS or hard metal turning tools. There are turning tools for both external and internal machining. The latter are sometimes referred to as boring bars if they are particularly long.

High- speed steel (HSS) turning tools consist of a single piece. They can consist of HSS throughout, with a tempered cutting edge, or the shank and base are made of simple steel with a welded-on cutting edge made of HSS. The shanks are rectangular or square for tools for external machining and round or polygonal for internal machining. An important differentiating feature for HSS turning tools is the base body: it can be straight, curved or offset from the shank. The shape of the cutting edge depends on the turning process: there are tools for facing, turning, threading or parting off.

Standards for turning tools made of HSS or carbide

The various forms are regulated in numerous standards. Usually the same shapes exist for tools made of HSS as well as those made of carbide. The standards for hard metal tools are given in brackets.

Lathe chisels with soldered carbide cutting edges are similar to those made of HSS. The forms and uses are basically the same. Cutting edges made of carbide are harder and more brittle. They are more wear-resistant, but more expensive. Therefore, the bodies are always made of a cheap material and only the cutting edges are made of hard metal. Worn cutting edges can be reground with grinding wheels made of diamond grain and synthetic resin bond. The hard metal turning tools are standardized in DIN 4982.

Toolholders are turning tools into which an indexable insert is clamped or screwed as a cutting edge. You can dispense with time-consuming regrinding. The cutting edges can be changed much more easily, which is why they are widely used in industrial practice. Both the cutting inserts and the toolholders are standardized, the latter in DIN 4984.

Various carbide indexable inserts. On the right a thread chaser

They are standardized in DIN ISO 1832 and are named with a code consisting of 10 characters:

Types of attachment of the cutting plates

Different types of fastening for indexable inserts: The two upper and the lowest clamp holders have a clamping finger (system C), the middle one clamps with a clamping finger in the bore (system M), in the second from below the inserts are screwed (system S).

There are several ways to fix the cutting inserts in the clamp holders.

Standardization of the clamp holders

Similar to the cutting inserts, there is a system for naming the toolholders.

Fastening of the clamp holder shafts in the machine

The shanks of the tools are either clamped directly in the tool slide (single tool) or clamped in a tool turret that can accommodate several tools. In addition to turning tools, driven tools can also be clamped there, for example milling or drilling tools. There are linear, star, polygon, drum, crown and disc turrets. Systems for square shafts are standardized in DIN 4984, systems for round shafts in DIN 8025. Prismatic shafts that are used in large machines are standardized in DIN 69880. The shaft systems are designed so that they maintain the stable position of the cutting edge - even under load.

A short clamp holder (at the top)

Short clamp holders are clamp holders that have a screw at the rear for fastening in the machine. With them, the plate position can be adjusted lengthways and crossways using adjusting screws. They are preferred for internal machining. They are standardized in DIN 4985.

Cutting heads are special, manufacturer-dependent (not standardized) tool holders that are designed for quick tool changes. Tool change times prevent production progress on the workpiece and thus mean reduced productivity. Cutting heads therefore introduce a further interface to the machine: An adapter is mounted in the tool holder in which the actual cutting heads can be quickly installed and removed. These systems are kept as short as possible so that they only take up little space. The exchange can be done manually or automatically. Cutting heads are suitable for a wide range of machining operations: longitudinal and face turning, external and internal turning, parting off and threading. Since the accuracy of the position of the tool cutting edge also depends on the deformation of the holder, cutting heads are designed for the greatest possible torsional rigidity and flexural rigidity .

Multi-task tools are turning tools that have multiple inserts at their end and are therefore similar to tool turrets. Multi-task tools, however, are clamped in drilling or milling spindles and are therefore intended for machining on machining centers (turning-milling machines) and turning cells . The spindle is rotated thereby such that the desired cutting edge for engagement occurs, and then remains during the machining in this angular position. As a result, the tool change times can be reduced on the one hand and the number of tools required on the other hand.

For thread production on lathes, several processes can be used, each of which is carried out with a special tool. The processes are collectively referred to as screw turning . The thread turning is carried out with a pointed turning tool, the point angle of which corresponds to the flank angle of the thread. Thread turning chisels are made of high-speed steel or carbide and are offered either as full profile tools or as partial profile tools. In the case of the latter, the turned part is previously turned to the diameter that corresponds to the outer diameter of the thread (for external threads). This preparatory work is not necessary for tools with a full profile design, as they not only cut the flanks, but also the outer edges of the threads. When threading, the thread pitch corresponds to the feed rate (mm per revolution). Usually several overflows are necessary.

There are also thread chasers . They have several profiles next to each other so that only a single overflow is necessary. The thread pitch of thread chasers is therefore not variable.

With thread cutting dies and cutting brackets , which usually have three cutting edges (which, like chasers, cut several threads at the same time) on different sides of the circumference, threads can also be produced without the use of a lathe.

Usually, the turning process (longitudinal, face turning, etc.) is selected first on the basis of the blank and the shape to be produced. A decision is then made as to whether the workpiece should be roughed (rough machining) or finished (fine machining). This severely limits the number of tools that can be used. The shape of the cutting edges and the holder influences which shapes can be produced, the roughing / finishing affects the cutting forces that occur and thus the minimum stability of the cutting edge. The available machine power has a further influence. The choice of the rake angle and the chip breaker also depends on the material. Soft materials that tend to stick are more likely to be machined with a positive rake angle, materials with high strength with a negative one.