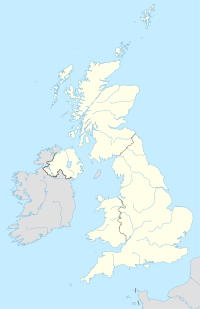 Droitwich Spa is a town in the English county of Worcestershire . The city is located in the Wychavon district and has 22,600 inhabitants (2001). 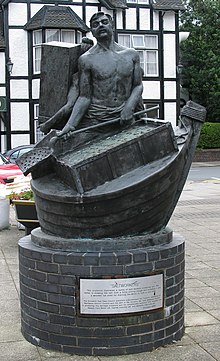 Monument to a saltworker at Droitwich Spa

Droitwich Spa is located on large rock salt deposits . Salt was extracted here as early as Roman times and a Roman foundation Salinae is documented here. The place gained importance through the connection to the railway network of the Great Western Railway in the first half of the 19th century. Until the 1960s, the population was always below 10,000 people. Since then, however, it has increased significantly with the influx from the Birmingham area.

The Church of the Sacred Heart and St Catherine of Alexandria , built in 1919–1921 , is a Catholic church known for its extraordinary rich mosaics. The design of the mosaics went back to Gabriel Pippet (* 1880, † 1962), the mosaics were executed by Maurice Josey and Fred Oates. Pippet was mainly influenced by his stays in Ravenna and Rome. Close to Droitwich Spa is Chateau Impney, a neo-renaissance castle built between 1873 and 1875 by the local salt magnate John Corbett for his wife, which is now a hotel.
The place is known nationwide for the nearby transmitter of the same name for long and medium wave, the Droitwich transmitter .