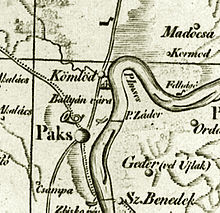 Dunakömlőd [ ˈdunɒkømløːd ] (also Kimling ) is a Hungarian village on the Danube in Tolna County near the town of Paks , to which it belongs, and the village of Németkér .

Probably as early as the 1st century, the Roman invaders built the Lussonium cohort fort on the high loess mountain in the south , the Bottyán-Sánc, which existed until late antiquity. At that time and until the 1840s, the Danube flowed directly below this mountain. In the 4th century, the Dunakömlőd Ländeburgus was built around 1.3 km to the south-east, on what was then the eastern bank of the Danube, on a crossing that already existed in prehistoric times . Even in post-Roman times this crossing played an important role for army units.

Like Németkér, Dunakömlőd was founded in 1785 by the Földvár Abbey and settled with German settlers (so-called Danube Swabians ) who followed the call of the Habsburg imperial house of Austria to settle the country after the end of the Turkish wars .

After the end of the Second World War , the Danube Swabians were expelled and resettled in the American zone of occupation in Germany. While most of the German-born residents of Dunakömlőd came to Gerlachsheim near Lauda-Königshofen in the Main-Tauber district in 1946 , some were also settled in the Dachau district.

The community developed in the 1980s and 1990s, not least due to the influx of engineers who work in the neighboring Paks nuclear power plant .