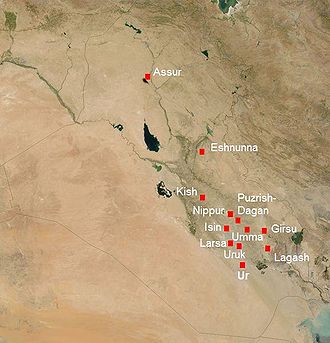 Eden ( Sumerian edin ; Babylonian seru ) is the Sumerian name for steppe and regions in the underworld and is part of the name of the deity Ninedena . In particular, Eden meant the grassland of domesticated animals. The extension An-Edena ( Heavenly Steppe / Hohes Eden ) was a higher-lying area in Sumer , the area of ​​which consisted of the enclosed area of ​​the cities of Uruk , Larsa , Umma , Bad-tibira and Zabalam .

This land name is known from the border conflict between Lagaš and Umma ( Lagaš-Umma War ), in which the Gu-Edena area ( edge of the steppe ) was concerned. The content of the dispute was the use of the rare pasture areas and an important water source on the edge of the steppe. Mesilim was the supreme lord of the two cities and was appointed as an arbitrator. However, the dispute could not be settled permanently and lasted for generations. Lu-Gal Zagesi , the king of the Umma, destroyed in the meantime because of the conflict in the 24th century BC. The city of Lagasch. The rivalry for this green area did not end until the Empire of Akkad .

In connection with the goddesses Geštinanna and Nin-sigar-edena ( mistress of the steppe bar ), an underworld steppe area called Arali is mentioned in texts from the Ur-III period , which was mentioned regarding Dumuzi's stay in the underworld.