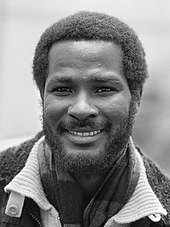 Edgar Cairo's parents came from the Para district in Suriname, an isolated area in which many African elements have been preserved in the culture. The first works were created during his school days. After graduating from school in 1968, Cairo went to the Netherlands to study Dutch and general literature at the University of Amsterdam . He made his literary debut in 1969 with the novella Temekoe in the national language of Suriname, Sranantongo . He later rewrote the story of a father-son relationship in two Dutch versions.

After Cairo found a publisher in In de Knipscheer in 1977 , the flow of publications continued: In more than ten years he published 15 books of prose, nine volumes of poetry and eight plays as well as numerous essays and columns in newspapers and magazines such as De Volkskrant and De Groene Amsterdammer , in Surinamese and in Dutch. He has appeared in numerous Dutch and international literary programs, often accompanied by the drummer Zapata Jaw. Cairo bought a red Maserati , which was stolen after a few days, and collected valuable colonial-style furniture. At least five novels remained unpublished. The work De smaak van Sranan Libre on December killings appeared posthumously in the year of 2007.

The themes of Cairo's works revolved around life in the Paramaribo neighborhoods and the history of black slaves. Later he dealt with the situation of the Surinamese migrants in the Netherlands and the multicultural Dutch society, finally with the colonization of blacks and the emergence of what Cairo called "negro mourning". His work was primarily determined by his opposition to any form of cultural colonialism. Almost all of Cairo's work has been published in Dutch and in Sranantongo. In Suriname, people often found his Sranantongo too difficult because he used many archaic forms and neologisms and tried to develop his own literary language.

Cairo did not reach a mass audience with its idiosyncratic usage of language. In the late 1980s he began painting with the same passion that he wrote with, and he created several hundred pictures. In his final years he was mentally ill and believed that his inspiration came directly from God and from Shakespeare and Dante . From 1989 he wrote “revelations”: De Jezus Passion , Hoogtezang and Dante in Motionaeii , identified himself with Jesus Christ and called himself “Edgar Jesus Kairo , the scribe from heaven”.

On November 16, 2000, Edgar Cairo was found dead in his Amsterdam apartment; he may have died the day before of a gastric haemorrhage , like three of his brothers before him.

In September 2020, the left-liberal political weekly De Groene Amsterdammer ruled Cairo that it was ahead of its time and that its messages had come too early. Today they would rather fall on fertile ground.