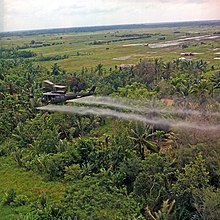 A helicopter sprayed defoliant in the Mekong Delta in 1969 .

Defoliants are herbicides that cause the leaves of plants to fall off quickly. Using them can make harvesting easier for some crops. Militarily they were u. a. used to defoliate trees during the Vietnam War to take cover from the enemy. In addition, defoliants were used to cut off the enemy from the supply of food by damaging plants. This led to environmental and health damage to a considerable extent.

Defoliants are used, among other things, before the harvest of cotton , soybeans or tomatoes . For this purpose, S , S , S -tributyltrithiophosphate (DEF), tributyltrithiophosphite (Merphos), sodium chlorate , magnesium chlorate , calcium cyanamide , sodium polyborates such as disodium octaborate , dimethylarsinic acid (cacodylic acid), dimethipine , diquat and paraquat were or are used.

Defoliants used in the military

Military defoliants were first developed in the United Kingdom . From 1940 onwards , the defoliants LN8 , LN14 , LN32 and LN33 , based on 2,4,5-trichlorophenoxyacetic acid (2,4,5-T), were manufactured and later tested at Imperial Chemical Industries . The planned operation against the “ Third Reich ” did not materialize anymore due to the end of the war. In the late 1940s and early 1950s, the United Kingdom's armed forces used 2,4,5-T to fight Chinese partisans in Malaysia ("Malayan Emergency").

When the US government under John F. Kennedy was considering the use of defoliants in the Vietnam War in the early 1960s , US Secretary of State Dean Rusk used the British approach in Malaysia in the early 1950s as a precedent to justify this use . Since there were no international protests or other critical reactions at the time, the Kennedy administration did not regard the use of defoliants as a violation of international martial law .

As part of Operation Ranch Hand was then from 1961 by the US forces many thousands of tons of defoliants ( English defoliants used) in Vietnam. A calculation of the total amount of these funds applied between 1961 and 1971 showed more than 70 million liters. Some of the herbicides used were contaminated with 2,3,7,8-tetrachlorodibenzodioxin (TCDD), a teratogenic ( causing malformations in embryos ) and carcinogenic (carcinogenic) substance.

In order to avoid the unwieldy chemical names, the individual defoliants were named according to the color of the ribbon, which had been painted onto the corresponding 55 gallon storage barrel for identification purposes, i.e. Agent Pink, Agent Green, Agent Purple etc. (so-called "Rainbow Herbicides")