The Erasmus Bridge ( Dutch: Erasmusbrug ) is a cable-stayed bridge in Rotterdam over the Nieuwe Maas , a main stream in the Rhine-Maas Delta . The after the philosopher Desiderius Erasmus named road bridge over which the line 20 of the tram Rotterdam runs, connecting the center of Rotterdam with the Kop van Zuid , an urban development area. 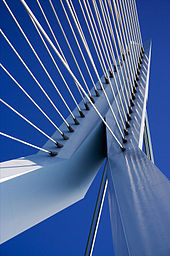 Upper part of the pylon

The structure is located at the Rhine - kilometer 1000.86 and kilometer 11.53 of the Dutch waterway 102 (Nieuwe Maas - Nieuwe Waterweg - Maasmond). The Erasmus Bridge is the last bridge on this waterway before it ends in the North Sea at kilometer 46.17 and Rhine kilometer 1036.20 . To the west of the Erasmus Bridge, the Maastunnel and the Benelux tunnel run under the Nieuwe Maas . At the southern bridgehead stands the striking KPN Tower by Renzo Piano with its facade inclined at an angle to the street (in the photo to the left of the pylon).

The 802 meter long structure spans the Neue Maas with a 410 meter long asymmetrical cable stayed bridge, which has a 278 meter wide main opening and a white 139 meter high angled pylon . This earned the bridge the nickname "de zwaan" (the swan). A bascule bridge with a span of 89 meters is located south of the cable-stayed bridge. It is the largest and heaviest bascule bridge in Western Europe. The total weight of the steel structure is 6,800 tons. The construction costs amounted to 165 million euros.

The bridge was designed in 1989 by the architects Van Berkel & Bos ( Ben van Berkel and Caroline Bos ). Construction started in 1994. The pylon was erected with the help of the world's most powerful floating crane, the Thialf . On September 4, 1996, Queen Beatrix of the Netherlands opened the Erasmus Bridge.

In November 1996, strong vibrations were observed on the stay cables of the bridge, which occurred in certain wind conditions in combination with rain pouring down the cables. That is why dynamic vibration dampers were retrofitted to the stay cables . In 1998 the bridge received the "National Steel Construction Award". A 1:25 scale replica can be seen in Madurodam . 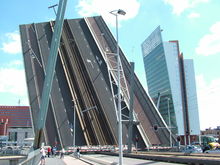 At the northern end of this bridge the ships start for a harbor tour. The standard trip takes 75 minutes.