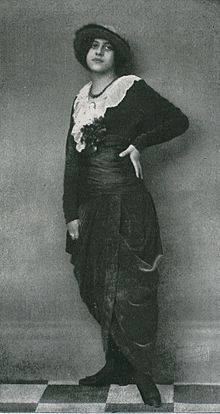 Erika Abels, who later adopted the stage name Erika (Abels) d'Albert , grew up in a middle-class, art-loving family. Her father, Ludwig Wilhelm Abels (1867–1937), was an art scholar, writer and, in 1898, editor in charge of the satirical magazine Das Narrenschiff , her mother, Anna Emilie Mewes, came from near Berlin.

She received her artistic training in Vienna in the private painting school of Irma von Duczynska (1869–1932) and Elza Kövesházi-Kalmár (1876–1956) and with Felix Albrecht Harta (1884–1967). At the age of 16, she went public for the first time with a collective exhibition (portraits, still lifes, fashion designs, nudes). In the following years she exhibited in the House of Young Artists (former Galerie Miethke, 1919) in the Künstlerhaus Vienna , in the Galerie St. Lucas (1920 and 1922), in the Museum for Art and Industry and in the Theseus Temple in the Volksgarten . In 1930 she took part in the exhibition of the Association of Austrian Women Artists (VBKÖ). In the early 1930s she emigrated to Paris, where she also took part in exhibitions. She exhibited in the Gregoire Schustermann Gallery in 1935 and in the Salon d'Automne in 1938 . After that, her further artistic activity is not comprehensible at the present time.

Today almost nothing is known about the oeuvre of Erika Abels d'Albert. She painted portraits, still lifes and nudes. Only three works can be proven in the original. The Wien Museum owns her oil painting Tram Conductor from 1919, in the Albertina there is a charcoal drawing of the head of a middle-aged woman (1924) and a chalk drawing of a Sitting Nude from the Back (1921). Occasionally, works by the artist are offered on auction.