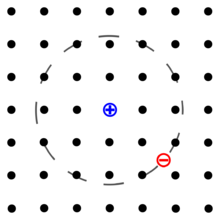 An exciton ( exciton from excitation ) is a bound electron-hole pair in an insulator or a semiconductor . It is therefore an elementary excitation of the solid and, like a phonon or a polaron, a quasiparticle . An exciton can move through the crystal and thereby transports its excitation energy through it without charge transport taking place, since the exciton is electrically neutral. Excitons have an integer spin.

An exciton plays a major role in the absorption of light in semiconductors. It can e.g. B. arise when a photon penetrates a semiconductor and stimulates an electron to transition from the valence band to the conduction band. The electron and the oppositely charged hole created in the valence band attract each other through the Coulomb force . This situation is similar to a hydrogen atom and can also be described in a quantum mechanical way. The bound electron / hole pair has a slightly lower energy than the unbound state. However, the binding energy is usually much smaller and the spatial expansion much larger than with the hydrogen atom, since the Coulomb interaction between electron and hole is partially shielded (“ screening ”).

Depending on their properties, a distinction is made between the borderline cases of the Wannier and Frenkel excitons, with well-known intermediate states.

Mott-Wannier excitons (after Nevill Francis Mott and Gregory Hugh Wannier ) phenomenologically describe the limiting case of large distances. An electron and a hole, described by effective masses , orbit each other. The influence of the surrounding solid is taken into account in a continuum approximation by an effective dielectric constant .

The middle term, here negative, is often referred to as the exciton binding energy

Frenkel excitons, named after Jakow Iljitsch Frenkel , describe the reverse approximation in which the electron and hole are localized at a lattice site. The energy of the interaction can then essentially be seen as the overlap of the charge clouds (described by the wave functions of electron and hole).

A Frenkel exciton is observed when the material in which it was excited has a high exciton binding energy. In particular, the purely thermal excitation is no longer sufficient at room temperature to separate ( dissociate ) electron and hole from one another . In the deep mutual potential funnel, the electron and hole are kept at a small distance (of the order of 1  nm ) from one another. What has been described is the rule for organic semiconductors and is therefore important for their description. Exciton binding energies on the order of 1 eV are typical here.

Energy transfer during photosynthesis and in organic solar cells

Energetic exciton transmission also plays a role in the antenna complexes of the photosystems of plants. The antenna pigments of the photosystems are brought into an excited state by the absorption of light. The energy is transferred to the neighboring pigments without radiation ( Förster resonance energy transfer ). Only when the pigment dimer in the reaction center has been put into an excited state by the transfer of excitons does an electron transfer take place. One of the molecules of the “ special pair ” releases an electron, which is replaced by an electron from the photolysis of the water.

In organic solar cells , too , excitons have to be split up in order to release the energy. This will u. a. achieved through the use of heterojunctions .